Just as dark skin is genetically different from light skin, African hair is hereditarily different from European hair. When it comes to hair though there is more to it than just the percentage of melanin that meets the eye. The genetic distinctions maybe small scientifically but they create physical differences that go beyond color or even texture. These differences are impossible to ignore. 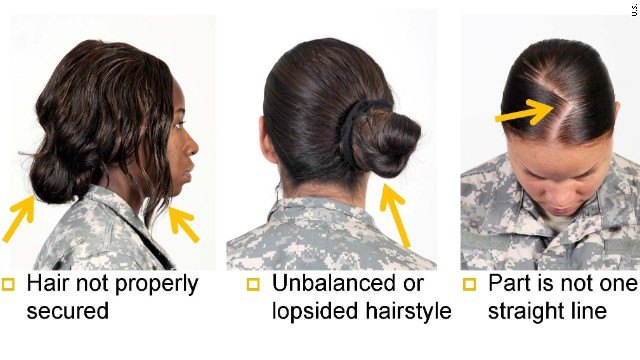 Compared to straight, wavy and curly hair that grow out of a rounded or oval follicle, African strands are unique in that they rise from follicles that are nearly flat in structure. This is the reason African hair strands don’t naturally lay down flat like other hair types as Asian and European hair does but rather stand up.

A regular mid size braid will naturally stay put in African hair. No need for scrunchies or anything at the end to keep the braid from unraveling. Straight or wavy hair can’t hold a braid without securing it. This is a simple but mayor difference that proofs that there is also different need when it comes to styling.

Just as hard as it is for straight hair to keep a braid from unraveling that is how impossible it is for African hair strands, to stay straight. For both textures the demand is too far from their natural DNA. So only by using tools or altering the core genetics of a hair strand, straight hair will be able to hold a braid and African hair will stay straight. Yet, African American women are expected to comply by rules based on straight hair and that is where the problem lies.

What is being ignored in this discussion about appropriate hairstyling is the price that African American women pay just to meet the corporate dress code rules based on a norm that is genetically different from their follicles. The Black hair care industry is a billion dollar business because Black women spend more than any other ethnic group on hair yet they suffer more hair damage than any other race.

In an article entitled Relaxers Can Cause African Americans’ Hair Loss (Skin & Allergy News, 2001) Damian McNamara writes
African Americans comprise almost 13% of the population in the United States but have a disproportionate incidence of hair and scalp disorders. In that same article the writer quotes Dr. Miller, dermatologist at the Milton S. Hershey Medical Center in Hershey, saying that 73% of African American women suffer from relaxer induced alopecia, hair loss related to chemical hair straighteners.

Hair loss, straightened hair and weaves are so ingrained in the African American community that it’s not even a surprise that Black women helped shape the new rules for the army. It’s almost normal and all the more reasons for change. 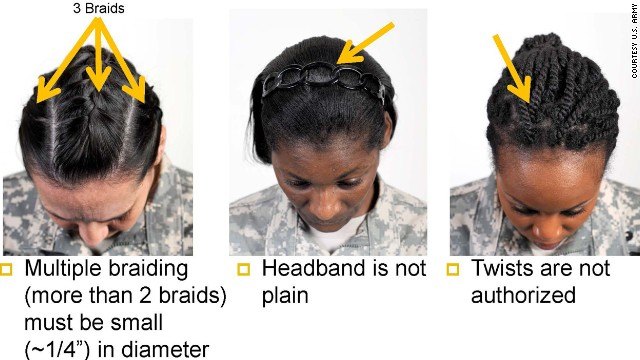 Natural hairstyling options for African hair are not relaxers, straighteners or weaves as you see in the examples on the army’s website. Hairstyles that genetically appropriate for African strands are braids, dreadlocks, cornrows, twists and flat twists. Despite what people think these styles are perfectly normal natural styles that are just usual to style, grow and care for African hair.

It is completely understandable that the army needs uniformity in their strive for a professional look of their soldiers. So it is totally fair that patterns, as gorgeous as they are, are not allowed in any hair type, cornrows, flat twists, braids and dreadlocks not excluded. Straight parts for everyone, no exceptions.
What is not fair and dear I say it racially bias is to exclude twists and dreadlocks as a hairstyle completely.

The only natural hair example in the post about the new Army’s rules is a twists hairstyle and frankly there is no good reason stated as to why it is rejected. The hair is out of the face, not loosely hanging but in a bun and wouldn’t interfere with head gear. That applies to all the rules the army set for all hair types. The only reason why twists are rejected is the rope-like texture that naturally comes with African hair and is even mentioned in the article as not allowed. How can genetics be ignored and not allowed?

Dreadlocks and twists may not be groomed the Caucasian way but that doesn’t make the styles unkempt.

The First Lady of New York ?Chirlane McCray has a beautiful head of dreadlocks that she styles appropriately for every event she attends. Yet, with the new rules in place the First Lady would not be allowed to join the army just because her hair is in dreadlocks. She would have to cut her locs down to a specific height or straighten her natural hair to join the army for no other reason than the fact that her hair is in dreadlocks.

Not only is it too much to ask of any woman to cut her hair, this rule is bias because a Caucasian woman with the same hair length just a different texture, straight or even curly, would not have to cut her long tresses to be accepted in the army. This shows that although they strive for it there is no uniformity in these new army rules. It’s probably without intention but they created exceptions for Black Natural hair.

African hair doesn’t want to and doesn’t need to be singled out. Black natural hairstyles can comply by the same rules as Caucasian hair if you are just acceptant of the natural genetic texture.

Link to Petition to the White House