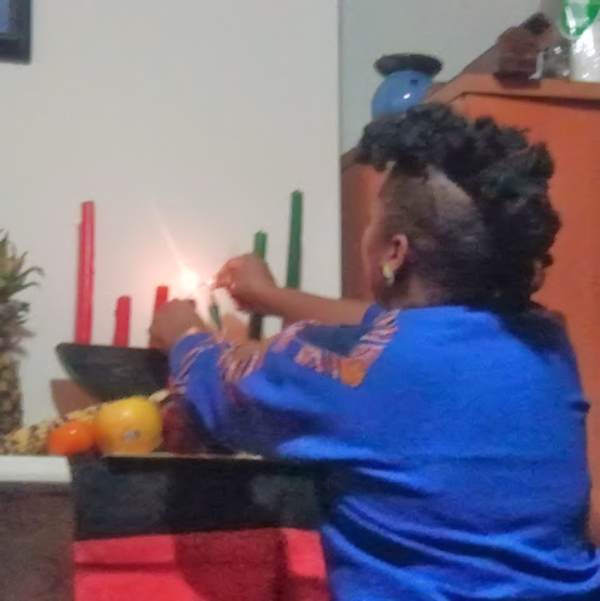 If I go by the first day of 2014, this will be a great year full of inspirational new things to experience as it was only a few hours into its beginning, when I received a spontaneous invitation. Brother Solwazi, the accomplished photographer who also shot the Going Natural Hair models last summer, invited me to join a private Kwanzaa ceremony. Although, I knew about Kwanzaa and even went to the National Museum of History celebration last month, I had never been to a Kwanzaa ceremony before.

END_OF_DOCUMENT_TOKEN_TO_BE_REPLACED

Kamal Imani is a New Jersey based spoken word poet and positive conscious hip hop lyricist. With the predominant bombardment of negative music and imagery, Kamal provides a breath of fresh air to those craving music and poetry for the mind, body and soul. Excitiing live show and presentation! Veteran Performer! HBO The Wire Spoken Word Finalist American Idol Chart Topper-Spoken Word Category WBLS Poetry Finalist NJ’s Most Talented NJ Nets Game Presentation Vocalized Ink Radio Chart topper. Kamal also has his 2 cameo appearances in the film “Golddigger Killer” as well as his music. New CD ‘The Mic Is Calling Me’ http://cdbaby.com/cd/kamalimani
His new CD “The Lost Scrolls of Eastern Philosophy” is soon to be released as well.
http://www.myspace.com/kamalsupreme (See Videos For “You A Armchair Revolutionary” & “The N Word”!
Kamal’s rapidly rising neo soul and spoken word fusion song and video “Ms. Melanin” a dedication to the Sisters has stayed on the American Idol Underground and Vocalized Ink Radio top charts for over 8 months including rave reviews from industry radio, media and fans. Kamal now has a 2008 “Ms. Melanin” calendar and other associated products coming out on the market. It’s success has also led him to host a radio show on Vocalized Ink called “Revolutionary Art”.
Kamal Supreme Amen AKA Kamal Imani has been blessing the Mic since the age of 9. He was born in Harlem NYC. He lived in the Bronx before moving to New Jersey where he performed at many house parties with one of his earliest crews, the Asiatic Brothers. He has been on the same stage (opened for or performed with) the likes of Buju Banton, MC Shan, Jazzy Joyce, Big Bubs, Cassidy, Red Head King Pin, King Just, King Sun, Das Effects, Doug E Fresh, and more!. KAMAL has been seen on a commercial for TNN’s & the WWF’s ‘WAR IS RAW’. He has comprised the soundtrack for RBG promotions new Blockbuster Distributed indie films ‘Holla if it kills you’ and ‘Goldigger Killer(Coming Soon).

He has performed as one of NJ’s Most Talented, at half time in The Continental Airlines Arena for the NJ Nets Game,  The Basketball Hall of Fame Organix Soul performance, He was recently interviewed and recited poetry on New York City’s progressive radio station WBAI, and performed at NY and NJ top poetry spots such as Nuyorican Poetry Café, Bowery Poetry Club, Da Underground New Haven CT with Influence, Nell’s, Serenitea, Wired Coffee House and more. He has performed at Princeton University, Farleigh Dickinson University, Medgar Evers College and Hampton University. Kamal was one of the star performers in the play “The Greatest Is Love” by Gloria Williams.  He currently appears in the film Golddigger Killer and has recently featured at the Organix Soul Showcase at the Basketball Hall of Fame in Springfield Mass.  Kamal is also a host of the Revolutionary Art Radio show on Vocalized Ink.org on Sunday nights at 8PM EST.

Kamal is an adviser to BWARE (Black Women Against Racism Empowered)

You are now witnessing the rise of one of Spoken Words Greats!
See my dedication to the Sistas video at http://www.myspace.com/kamalsupreme