Photo by Ade Adetayo
While the Gele today is a modern accessory for women to wear when they wish to dress up an outfit or celebrate an occassion, the elaborate headscarves worn by African women for hundreds of years were a statement and a cultural symbol of their station in life. If you’re going to rock a Gele today, it’s important to have 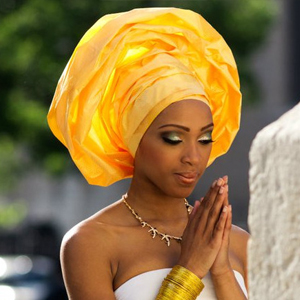 some understanding of the history and meaning of your look.In regions of Africa where fine cloth was produced, especially West Africa, women traditionally wore head wraps, scarves or ties over their short cropped hair. These were large squares or long lengths of patterned fabric that were folded and tied in arrangements that varied according to local custom, her marital status, or the occasion. Ordinary women generally wore simple wraps. Young, unmarried girls often went bareheaded. Married women wore head scarves or wraps as a symbol of their status. {loadposition rite}

High, wide or complicated ties and designs were a sign of wealth and community status, and worn by women who did little manual work. The styles and folds and the fabric used for the Gele all served to identify the woman wearing them as a particular social status, area of origin, or the ceremonial occasion at which it was worn. Today, these things are generally reflective of the unique and varied tastes and fashion sense of each woman who wears them.

The type of Gele worn by women today, with its folds and wide shape, originated among the Yoruba people in Nigeria. The Yoruba were among the first to wear head wraps as adornments, made from the unique fabrics of the region. The Yoruba invented a woven textile called Aso-Oke, which is still used to make Gele today.

As a modern woman who wishes to pay tribute to her African heritage while looking beautiful, wearing a Gele can be the perfect option. Today women of all stations in life can enjoy the head scarf and feel like a Nigerian queen for any occasion.

Ade Adetayo is a semi-professional photographer who has a preference for natural looks.

Natural Hair dilemmas in the industry and workplace Sponsors of 2012

How to do a Head Wrap in 2 minutes