On September 15 last year, three women filled a court case against L’Orèal SoftSheenm alleging that the Optimum Amla no-mix no-lye Relaxer caused hair loss, burns, irritation and other problems. The complaint filed in the U.S. District Court for the Central District of California is seeking class action status on behalf of all women who used the SoftSheen Alma hair relaxer. 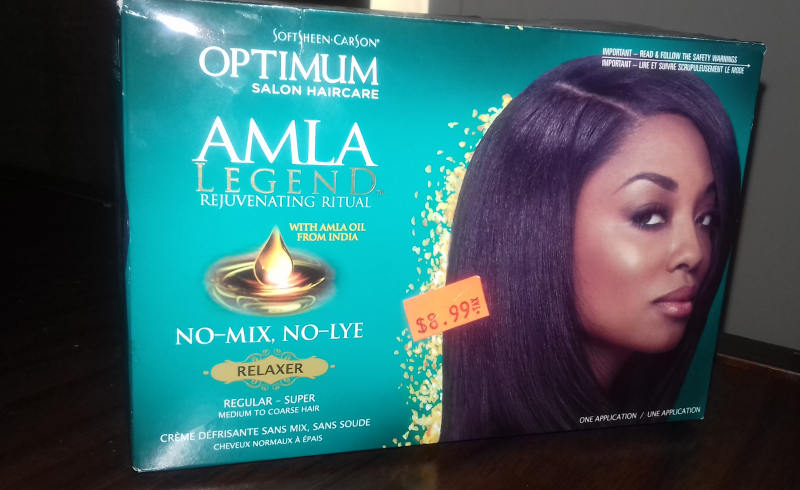 In December, the company hit back stating the product’s label clearly and repeatedly warns users of the risk of injury. The Top Class Actions site writes:

L’Oreal told a California federal judge that the plaintiffs’ claims are “unreasonable interpretations,” pointing out that the complaint omitted references to the numerous safety warnings on the exterior of the Amla hair relaxer’s packaging.

These warnings, according to L’Oreal, explicitly warn about the possibility of serious injury to a user’s skin and eyes, and that it may cause damage or permanent hair loss.

L’Oreal argued that they have not concealed the caustic nature of Amla hair relaxer, but instead have provided adequate warnings of the product’s ingredients, including alkali – a corrosive chemical compound. In fact, L’Oreal states, the label tells Amla relaxer users to wear gloves throughout the treatment process and to keep the relaxer off the scalp and skin areas.

The cosmetics company said that the plaintiffs are simply theorizing that a reasonable consumer would infer the relaxer’s packaging and its warnings to mean that the product is a “safe, nourishing and gentle” alternative to lye-based relaxers and is less likely to cause irritation or be harsh on hair or skin.

What the company is basically saying, use at your own risk and don’t even try to blame us when things go wrong. All the risks are cleary stated on the box. We are not even trying to hide anything.

The tree women Sharon Manier, Dorothy Riles, and Lakeytra Nero behind the lawsuit however state that there are claims going back to 2013, which is true. The product rates  two stars on amazon with the majority of reviews supporting the women’s claims of burns and hairloss. There are even youtube videos confirming the claims from three years ago.

On February 20th they got support by another plaintiff named Kishta Finch, from Kansas City, Missouri of which the Top Class Action site says :

Plaintiffs in the Amla MDL similarly allege that L’Oreal knew about the problems associated with its Amla Relaxer dating back at least three years and that the cosmetics company even paid off users who posted negative reviews or complaints about the products online.

There are enough supporting reviews all over the web to wonder why the company didn’t recall the products.

Lawsuits against companies that make relaxers are not new. The biggest one was in 1997, against the now-defunct World Rio Corporation, claiming that its product caused baldness, green scalps and other health problems. A $4.5 million settlement was awarded to 53,000 women. Among them was Yvonne~Yhoney who wrote that she received a check of $71.00 but never got her hair back and has been bald for years.

The most infamous claim against L’Oreal/Carson was that of Isabella Broekhuizen, a Dutch rising model who says her scalp was mutilated after a Chicago salon used the company’s product to straighten her hair. (see video at the bottom of the page)

What these women who sued sadly seem to have in common is that the damage was done; their hair never grew back. Isabella who claims never to have been compensated, needs to spend hundreds of Euros on hair prostheses because normal wigs won’t do. Her scalp is still so sensitive that she even has to be careful exposing it to sunlight.

What is different now is the timing of this class action lawsuit. It comes in a time when relaxers sales have structurally been losing ground for years in a row. While the Black hair industry is growing, relaxers sales dropped 34% in 2014 and the prediction is that this will continue to drop to 45% in 2019.

Another factor that will probably make a key difference is social media. The company itself has a facebook page but the section to review products is wisely not activated. Still, some of the amazon complains are very strong including photo evidence. There are many more of those complains on sites like sallys and wallmart and even youtube vloggers reviews.

A search on youtube on the Amla no-lye relaxer shows testimonies from reviewers who are not necessarily negative about the product, Youtuber Divakenietha even recommends it, but confirm the claims that the product burns.

As this video of Divakenietha who followed the instructions shows, she will blame herself before she blames a product or company for her experience. When I look at it now, it seems that she in denial but I at the same time I realize that I was not that different just a few years ago. I could not believe that companies would sell products that could harm their customers.

Even when I decided to go natural because my hair breakage was so severe, I believed it was just me and that it was just my scalp that couldn’t handle relaxers. Everybody else seemed to be doing ok using the chemicals.

Still, I wonder if this class action lawsuit if it goes through will be the lawsuit that will make Black women truly understand that the use of straightening chemicals is hazardous, will damage your strands and take out your hair. That this lawsuit against L’Oreal will drastically drop relaxer sales even more than predicted.

I don’t necessarily want to stop Black women from relaxing their hair, I just want them to be fully aware of the risks they are taking. No different than the smokers who now know that smoking is bad for their health. It also took more than a few lawsuits followed by dramatic packaging changes before the awareness sank in.

What do you think? Will this lawsuit change Black hair care or will L’Oreal/Carson win?

Customers who bought the Optimum Amla no-mix no-lye Relaxer can contact their firm by filling out this form to find out if they are entitled to compensation.