I have been so consumed with keeping the website up and running and projects like The Pursuit of Nappiness and America’s Next Natural Model going, that I never really had time to realize how many different styles I have done over the years. Your increased interest, questions and wonderful  compliments not only made me see that I have worn quite a bit of styles, they also encouraged me to start putting up all the styles I have had since I started this journey.

What got me started
After a publisher in the Netherlands was interested in publishing my book, I was in search for pictures. Especially for the cover since we weren’t in agreement about that at all. When I didn’t want to go along with a predictable illustration that had nothing to do with black hair whatsoever, he proposed to use this expired id picture of me with extensions. That was also a no-no for me.

Kroeshaar: the 1st book about natural hair in the Netherlands
My book was going to be the first Dutch publication about African Hair and after centuries of colonization I thought it was important to show the versatility of African hair without extensions. Unfortunately this white man didn’t have a clue about natural hair nor about the history that our roots carry so I decided to work on my own cover.

The problem was that I hardly knew anyone natural; either in the United States or Holland. Since I had a full head of natural hair, I decided to do some of the modeling myself and that’s how I got started. 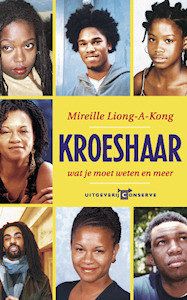 Soon after launching http://kroeshaar.com to support the book, I realized that this was going to be an ongoing gig if I wanted to keep the website interesting. Multiple requests to email photos of natural hairstyles were sent to deaf ears. So, I kept on taking pictures in the hope that it would inspire others to do the same.

Since then it has been quite a quest but in all honesty I have to admit that the whole experience contributed to my personal development. Although I have a rather outgoing personality, like any other nerd I’d rather hid behind the bits and bytes. Especially when it came to beauty issues and certainly hair. I am just not the type who likes to spend hours in front of a mirror. Impatient as I am, comfort and easiness are more important to me than looks.

So not only did I come out of hiding from behind my laptop, I became less impatient and even seek different styles. Styles I doubt I would have tried otherwise.

Now hopefully there is enough variety for every one to find at least one favorite. If there is just one style that you like to try out of my personal journey, it will be worth every dire second that I spent selecting, uploading and creating the gallery. Even more, I will humbly consider it another accomplishment.