Life in Puerto Rico was getting better every day. I loved it here. Suddenly, I started to get sick. After I got out of the hospital mommy found out there was mold in our apartment. The lady that owned our apartment would not fix it, so we had to move really fast. After Christmas we moved into our new house. We were still in San Juan, but we were not in the Santurce section any more. The Montessori school was now too far away, and mommy did not have money to send me back after she paid for us to move, and paid for our new apartment. Now I had to go to public school. I had been to public school in New Jersey, and it was fine. I thought this would be the same. 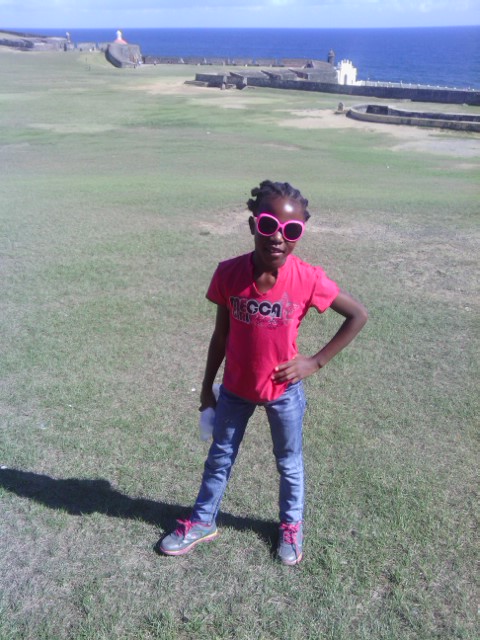 My new school was Eneida Colon in Cupey. It looked a lot different from my old school, but it was still nice. My teacher was Mrs. Rosa, and she spoke a little English, and by now I could speak a little Spanish. Some of the kids spoke English, but not too many. There was no one that looked like me. Everyone in the entire school looked like they were born here in Puerto Rico. All of the students, all of the teachers, everybody, except for me. I did not think I would make any friends, but I did. It was not the same as my other school. Some kids liked me here and some didn’t.

Everyone wanted to know why my hair was not long. They all said I Iooked like a boy. I told them, how can I be a boy, and my name is Kendra? That was just silly. There are no boys named Kendra. I had lots of friends, but a few boys would always pick at my hair. They would pull on it, and point at me, and say mean things. They called me names, and always tried to fight with me.I tried to take up for myself like mommy taught me, but sometimes I was scared. They were boys and they were stronger than me. Some of the girls wanted to fight with me too. I was not as scared if they were not from the older class. My teacher never let anything happen to me when she was around. The problems always started when we were going to gym, lunch, or whenever my teacher was not there.

One day a boy punched me in the stomach. It hurt really bad. I finally could not take it anymore. I told mommy, and she took me to the principle. The principle asked me if I wanted to change classes. I told her no “I wanted to change schools, because I was tired of fighting everyday”. My mommy cried when I said that. I think my principle cried too. The principle gave me a big hug, and told me how sorry she was. That was my last day at Eneida Colon Elementary School.

Natural Black hair and the first day of school