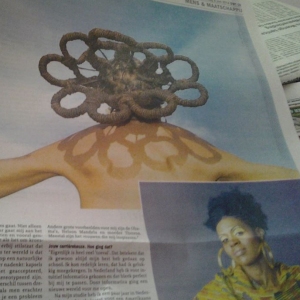 BAD Hair Uprooted is the 10th anniversary exhibit of going-natural.com, a social web and networking site connecting more than 40,000 members interested in natural hair. More than shining a light on uniquely beautiful natural hairstyles, the photo montage highlights the social injustice against Black hairstyles and shines a light on a movement that rooted in New York almost 30 years ago.

It might have gone unnoticed to the majority of New Yorkers when a little salon opened its door in 1985 on Flatbush Ave in Brooklyn but it was history in the making. Kinapps was the first ever Natural Hair Salon in the world where Black people could go to get their dreadlocks professionally groomed and their services laid the foundation for the natural hair movement that is alive and growing. Today the world wide web counts an estimated 100,000 natural hair bloggers and video channels and the end is not nearly in sight.

With a First Lady who wears her hair in Dreadlocks, a first daughter who is natural, a first son who’s Afro changed an election and at least two elected officials with Dreadlocks, New York might be considered the leading capital of the world when it comes to natural hair and may be even politics. So the Bad Hair Uprooted exhibition seems to be at the right place at the right time.

Featured in De Ware Tijd, the national newspaper of the photographer’s home country Suriname, Bad Hair Uprooted sparked attention in Suriname as well as the Netherlands. Mireille Liong, the woman behind the natural hair portraits, already said yes when asked if she is interested in taking the exhibition internationally.

The photo book BAD Hair Uprooted, a Celebration of Black Follicles is available via Amazon Kindle and the Going Natural Shop and the exhibition is open until August 23rd .

Special events are planned every weekend. On August 9 the documentary the Going Natural Video Diaries will be screened, August 10th is a day of natural hair workshops as well as a free photo shoot and the largest giveaway in a decade. The exhibition closes on the 23rd with a hair and fashion show featuring African designers. Tickets are available at the Going-Natural.com Events page. For more info visit going-natural.com.