It’s been really tough for me watching the #WhyIStayed tweets and reading the responses. Just asking the question without implying that the victim is to blame seems impossible. However, in all honesty without wanting to judge, I admit to asking that question over and over and over again. 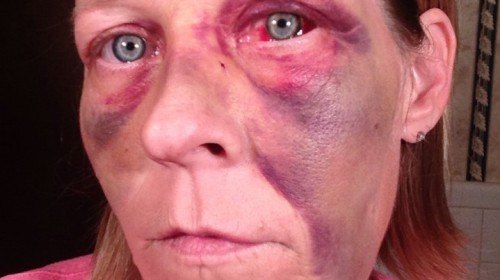 Remember Angela Brower of Tennessee? Another hero who used her Facebook page to advocate against domestic violence

As a woman who grew up in Suriname domestic violence against women made headlines ever since I was a little girl. The very first case I remember was that of a native Indian woman who fled her village because of abuse. Lost and alone in a rural area without food and water, it was only a matter of time before her lifeless body was found.

The second case which is also hard to forget was a woman from East Indian descent who hid in a washing machine for two days before committing suicide. The third one was very similar, another East Indian woman who couldn’t take the beatings any longer and also ended her life. Unfortunately there were more cases after that but I just stopped counting. It was just too horrific to process.

What all of these cases had in common though, was the fact that each and every one of these beautiful young women, of whom I didn’t even know their names, were courageous enough to try to leave at least once. These amazingly brave women with a full life ahead of them refused to take a life of beatings. They rather risked and took their own life than living one of abusive violence.

The most horrifying part is that in all of these cases is that the women were trapped. They were stuck in a culture that wouldn’t allow them to stand up, let alone leave. An abusive husband was not uncommon. You just had to learn to deal with it. There was no help. No one, no loved one, no family or friend they reached out to, could or would help. There was no escape so these women took their own life.

Years later I found out that a friend of mine was in an abusive marriage. This was a good looking young woman from a well to do family with no cultural background that would press her into any kind of marriage. She also knew before they tied the knot that he was abusive, yet she married him. It was her choice.

Don’t get me wrong, we all at one point in our life ignore red flags and believe we can change someone blinded by love, so who am I to judge. I do believe she married him out of love but in all honesty I also wondered if there would have been a wedding if he couldn’t afford to buy her the bling she loved so much or without the so called status she imagined would come with being his wife. However, without judging I respected her choice.

Of course the abuse only continued or maybe it even got worse because her husband once beat her up so bad that she needed to go to the emergency room. Her father who picked her up while her face was bleeding, said it took every inch of his being not to harm his son in law that day. That it was the expression on the little kids faces that stopped him in his tracks as they were just staring at their grandpa with painfully blank faces when he came to take their mother to the hospital. To anyone even a little familiar with domestic violence it won’t be a surprise to read that my friend went back to him after that incident.

Anyone who has ever been close enough to this kind of domestic violence knows this: There is absolutely nothing, NOTHING, you, I or anyone can do to make an abused woman leave a violent relationship. Yes, every case is different but I don’t believe a therapist, doctor or family member can talk a woman into leaving her abuser, if she is not ready to do so herself.

All we can do when we see an abusive relationship from up-close is watch from the sidelines and hope that the victim hits rock bottom so she can leave before the abuse becomes fatal.

To me this tweet from Beverly Gooden who deserves a lot of credit for opening up the twitter discussion says it all:

“#WhyIStayed: You think you know but you have no idea”.

It is the most honest, the most truthful and the most helpful tweet because from what I’ve seen I truly believe most abused women don’t even know why they stay. It is not the bling, certainly not love but something almost impossible to comprehend.

So if the victims themselves have no idea, how can we even begin to help them without asking that loaded question: why do you stay?

I may never understand why any woman would ever go back to a man who so much as lift his finger to her. One time in my book, is one too many, certainly if she has the option to leave but that doesn’t mean that I have no compassion, that I will stop trying to help or will stop trying to understand.

I know it can’t be nearly as hard as taking a knockout punch that the world gets to see over and over again but it’s still excruciatingly painful to stay on the sidelines and watch a loved one going through beatings without being able to lift one single little finger.

So when we ask that question it’s not to blame the victim but we friends, family and loved ones on the sidelines are merely trying to get to the root of the problem in the hope that we can understand and help.

We may never get an answer as truthful as that of miss Gooden’s but if we ever stop asking that question it would mean giving up on a victim. That implies surrendering to the believe that we will always be powerless bystanders to domestic violence and that is really just not an option.

The best and Cutest Racism Video Hi! I am Kendra Nicole