The first Black Super Model was a princess in exile. 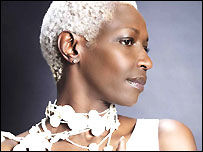 Princess Esther: Super Model and Trend-Setter
As far as real-life princesses go, Princess Esther Kamatari is among the most accomplished ones you will ever find. She made her mark as the first Black runway model in Paris, became a published writer and ran for the presidency in her fatherland not too long ago.

Oh, and not only that, her signature snowy, cropped hair and penchant for white suits made quite a fashion statement during her heydays as a fashion icon in the seventies.

Esther Kamatari is a true-to-life princess and a member of Burundi’s royal family. Born in 1951, Princess Esther came into this world at a time of civil war and would suffer her share of personal tragedy.

At age 11, she joined her countrymen in celebrating Burundi’s independence from Belgium. However, the time of celebration was short-lived. A military coup d’ etat soon overthrew the king and abolished the monarchy in 1966, ushering in a new period of mayhem. After her father was assassinated in 1970, Esther felt the urge to flee Burundi.
{loadposition rite}
With money saved from her allowance she bought a ticket and secretly arranged for a passport including a visa to go to France. In a time where African women were not allowed to travel alone, she made it to the country of Allan Delon, her adorable French idol. Not only had she never been on a plane before, she had never seen an escalator before, did not have a cent to spend and was amazed to see so many white people at the airport of Le Bourget. 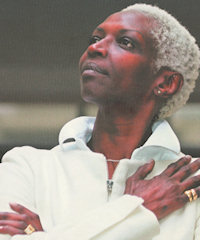 Her royal upbringing, openness and sharp intelligence made it easy for Princess Ester to quickly make friends and adjust to life in in Berck, a small village near the France shore. Before long she had a boyfriend and got married. While juggling family life as a new mother, a hairdresser who noticed her majestic posture persuaded Esther to go to Paris to become a model. And so the story of the Princess who became the first Black runway model began.

Almost overnight, Princess Esther Kamatari became the talk of the town. The best couturiers in Paris wanted her in their shows and even France’s elite jet set welcomed her with open arms. Soon, miss Kamatari became Paco Rabanne’s favorite. No one in Paris could resist the charms of the stunning Princess, Black Beauty and Mannequin all rolled into one.

More than the first black runway model in Paris, Princess Esther became the first black supermodel in France. She was one of the pioneers that exposed the beauty of black to the world, and paved the way for a veritable army of black models to enter the world of high fashion. Through it all, Princess Esther carried herself regally, as befits the stature as a royal princess. She dazzled people with her beauty and charmed them with her eloquence.

In her book she writes: “I lived a fabulous glamorous lifestyle but the glamour and the spangles never blinded me. I was aware that beauty is in the eye of the beholder and depends on cultural standards.”

As the first black supermodel in fashion, you would think that the road would not always be easy. Yet Ester recalls only one case of racism. It was during a show in Porte de Versailles. As she recounts, “At the end of the show I played the bride’s page when all of a sudden the model turned around and yelled ‘let go of my veil you dirty ni**er’. In response, I instinctively slapped her in the face. I was fired right there and then. I was sick of all the people who stood by and didn’t say anything.”

She was once asked in an interview about the best advice she ever received. She replied, “Not to want to be someone else. I have woolly hair, it remains wool. I am black, I remain black. I can change looks without changing identity. I am very proud to be black.” Africa is in my blood. You can see it in the way I walk and the way clothes are draped around me. I grew up carrying calabash on my head so the stature is a second nature. An African can float and still be present.

Miss Kamatari even left the fashion world like a true queen. Her last fashion show, the collection of Anne-Marie Beretta, was the first show ever for maternity clothing. The audience couldn’t believe that she was really pregnant when she modeled a wedding gown of yellow-gold silk. 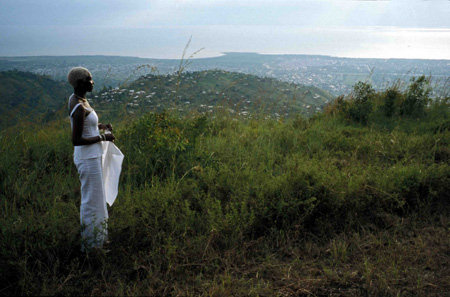 Remarried, family life allowed her to reconcile with her country Burundi. Despite her great success in fashion, she was still a Burundi princess at heart and remained determined to help her country. She worked endlessly to help her people rebuild their lives. She organized countless fundraisers to raise money to rebuild her fatherland where and however she saw possible.

In 2004, Princess Esther returned to her native country to run for president. Her strategy was to bring about lasting peace by working on Burundi’s children and teaching them that ethnic differences do not matter. “I have never seen a light blinking on a child’s forehead saying ‘I’m Hutu.’ or ‘I’m Tutsi,”‘ she said. “When I see a child, I see a child. If he’s Tutsi, he’s Tutsi. If he’s Hutu, he’s Hutu. He’s a child and, above all, a Burundian.”