ReShonda – The Maroon Women of Suriname 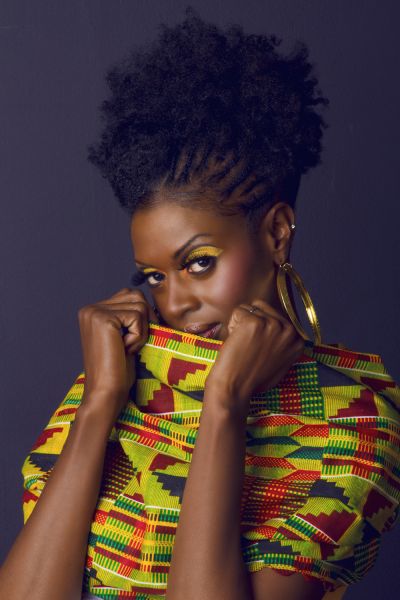 One thing I have enjoyed the most about being a finalist in “The Next Natural Model” is being able to experience different things. This challenge was very interesting because I had the opportunity to learn about a community of people that were brave and courageous and reminded me of our American Harriet Tubman. The Maroons are the descendants of runaway slaves who escaped into the interior rain forests immediately upon their arrival in the English, later Dutch colony. I admire them because of their strength, pride and defiance. That is still evident in their culture today. 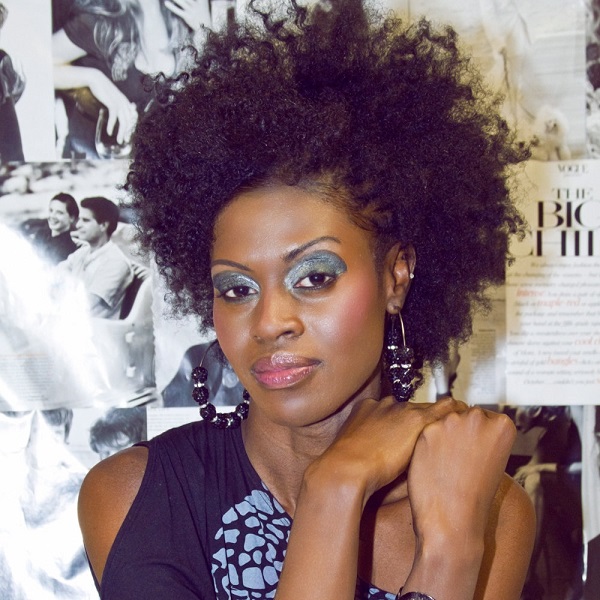 The Maroons of Suriname lived in independent communities that survived for centuries. Suriname is in South America but is considered a Caribbean country and more than 90% of the national territory is covered by rain forest! I loved to hear about their African culture and the way it was passed down from generation to generation. Their official language is Dutch, but I read that some 20 languages are spoken!! I learned that the major language creole , was developed at the plantations and spoken between masters and slaves.

Everything I read painted vivid pictures in my mind. I read about the Art, food, religion, music and so much more. The women I found fascinating! I read the history of the Maroon women and I read that they were the emotional and economic center of the household. I found an article written by a woman that traveled to and lived in Suriname briefly and she spoke about the beauty of the Maroon women. She told of them being “amazing, vibrant, strong, passionate and fun”. I read about Fedilia Grand- Gamon who heads the Maroon Womens Network. She has a PHD in Sociology and is the first Maroon woman in Suriname to obtain such a distinction!

For this challenge, we were sent some beautiful fabric to make into an outfit to model. When I opened the box, I was greeted with two pieces of fabric. The colors were bright and wonderful! The fabric had a beautiful pattern of swirls.

My fabric was multi colored with white, yellow, green, red and black. From my reading, I learned that the Maroons have four clothing categories. Busiman-koosi is a collection of various costumes made of natural materials such as tree barks, leaves, reeds and creepers. Wenti-koosi/ Gadu-koosi is their religious dress. Poolo-koosi is their stylish dress. Baakaman-koosi is their mourning wear.

The most important of the Maroon dress is the Pangi. “Pangi” is the name of a cotton fabric with multi colored horizontal and vertical stripes and is traditionally used. Pangi is also the the name of the traditional wrao skirt of the Maroon women. For the men, they wear it as breech cloths, shoulder capes, etc. The fabric is used to make many things from hammocks to slings to carry their babies in. The fabric closely resembles the West African Kente cloth.

I learned that in the beginning, this fabric was kept plain, but in the nineties, the Maroon women started to add embroidery and appliques. These Pangis are worn by all nationalities in Suriname. There are also different types of Pangis. Lalapangi or Selempangi/ Seenpangi is the plain pangi. Gi pangi (give pangi) is what the girls receive during the initiation ceremony from girl to woman. Pangi uman (pangi woman) is the pangi from a woman of good standing and finally Pangi nen (pangi name) are Pangis that were specially created to mark memorable happenings. I read that there was even a Pangi named after our President Barack Obama! Learning all of this made me very proud to wear mine!! I didn’t really know how I would create a traditional outfit with my fabric, but since I’d read about the fabric used as a wrap skirt, I used my longest piece for that. The bottom of it had a beautiful scalloped trim. The shorter piece I fashioned into two separate tops.

The first was a kind of shoulder piece over a tank top. From the pictures of the Maroon women, I saw that many of them wore simple tank tops or shirts that were plain and the Pangi added a burst of gorgeous color and design! For the second style, I wore it as a top to my wrap skirt. For my hair, I decided to wear it in an updo with braided sides because I read that the Maroon women use to keep their hair natural and braided or kept short. It was amazing to me that these women were not so different than we!

For my makeup, I wanted it to be as colorful as fabric the Maroons wore. That was what I loved when I saw mine, the colors jump out at you! This challenge really made me feel a deep sense of pride! We are definitely connected by our roots! For the second part of the challenge, we were told to wear our hair OUT! I LOVE big hair!!!

Usually I wear twist outs, but for this challenge I decided to change it up and wear my hair out in an afro! I love my natural hair and I wanted to show everyone that natural hair is very versatile. You can do anything in your imagination! Natural hair also means healthy hair….what’s not to love about that? I tried to get my hair as big as I could get it, but it was raining that day and the humidity did it’s own number on it (lol). Our hair has many moods, that is another wonder of our hair! Wearing my hair out always makes me feel like I rule….. It makes me feel like I ROCK!!! I chose to wear something darker than the outfit I wore in the other pictures. I thought powerful and edgy.

My makeup artist did an almost metallic looking smoky eye.  I felt like a rockstar with my fro (lol)! It instantly made me feel like Lenny Kravitz when he rocked his hair big and wild! I thought about the gorgeous fro of Esperanza Spalding and how it just looked so soft and plush! All naturals know the saying that rings loud and proud “Big Hair Don’t Care!”. I had fun with this challenge!

The Photography was done by Sammie Saxon Photography & Graphic Design and the makeup artist is Hair & Makeup Artistry by Jessica Nicole. 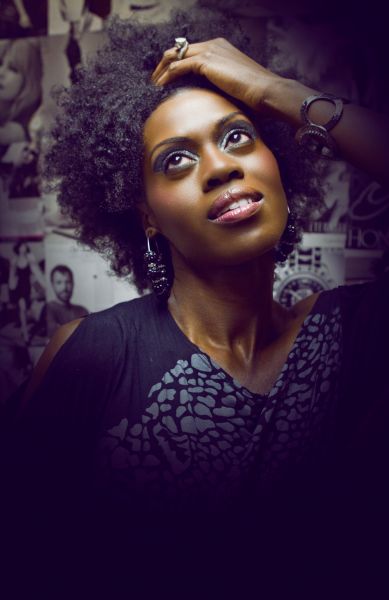 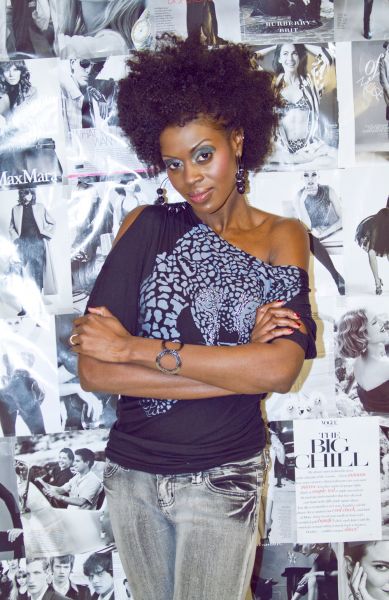 Loving my Natural Me 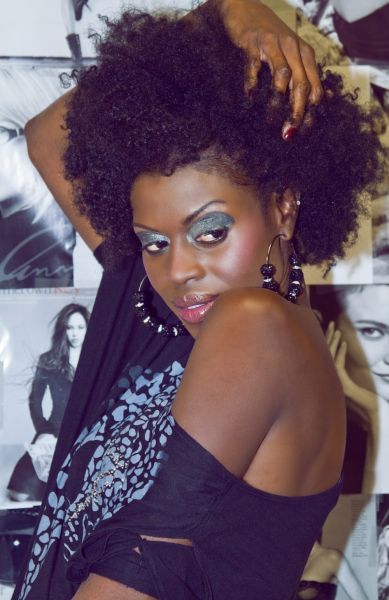 My Afro makes me feel Exotic 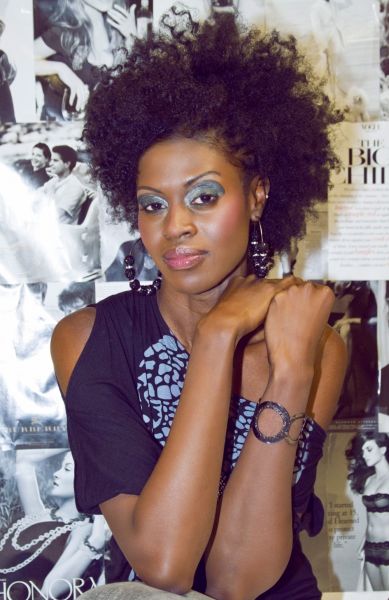 My Afro makes me feel Strong! 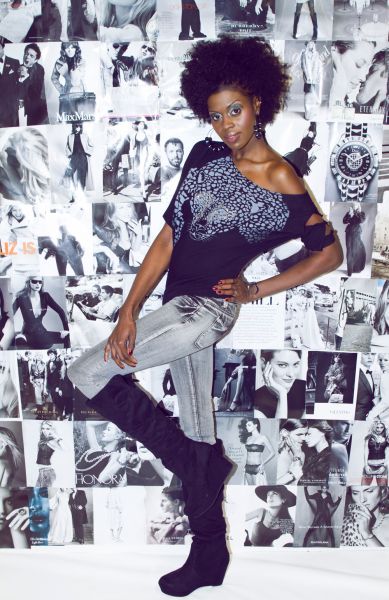 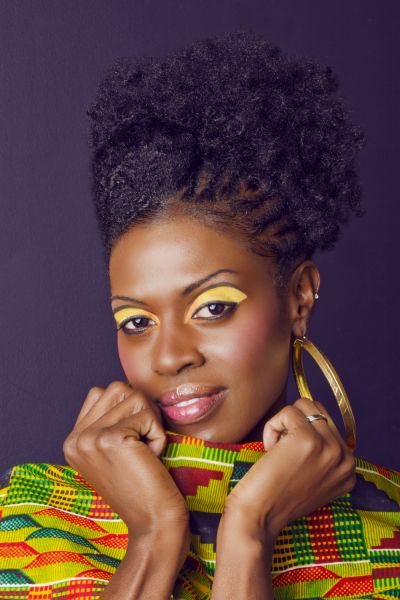 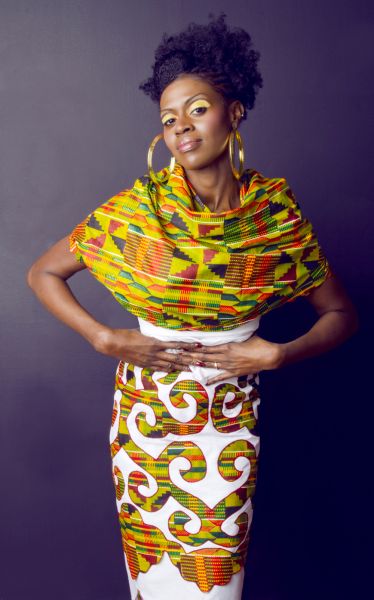 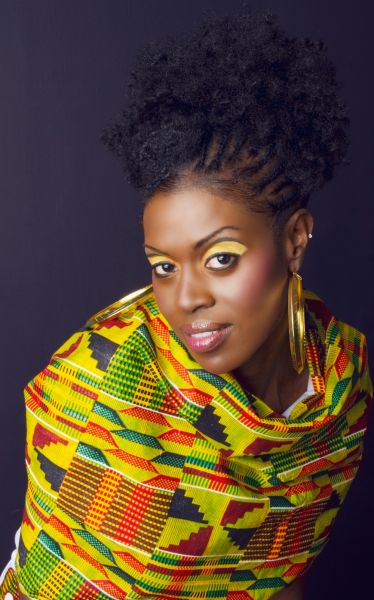 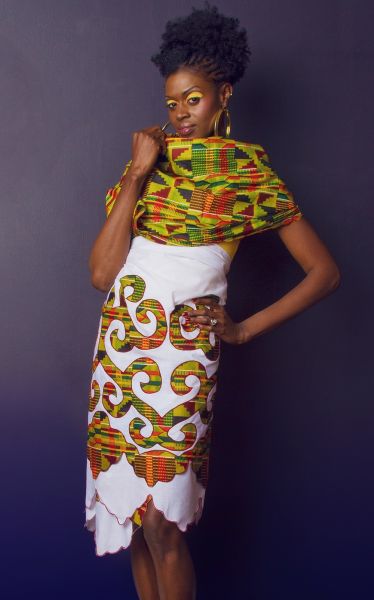 Throughout this reading I was touched by her expression and her connectivity to the pride and defiance of the Maroon woman. Her defiance is her source of preservation to her African heritage, despite the challenges to adapt to the western culture that is penetrating into the livelihood of the Maroons.

The Maroons kept to their language, protocol and ethics. Even if they speak Dutch, English or other foreign languages to their tribe, they are very much aware of the importance of holding on to their own language. We speak about six different languages among the Maroons: Okanisi, Saamaka, Paamaka, Aluku, Matawai and Kwinti. All Maroons, educated or not, are speaking their own tribal language because of pride and defiance. I really love the way this lady formulated her understanding of the Maroons. I will rate her 4.5 out of 5.