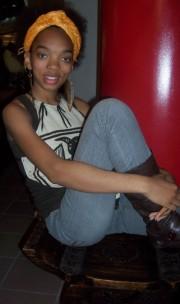 What does the hair wrap symbolize ?  Is it for style , protection or subjugation ? To wrap not to wrap ? 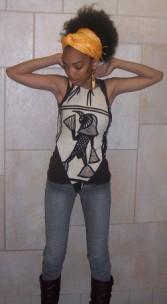 I spent this week working as a assistant to a vendor at the Pan African Film Festival, there were many women walking around with beautiful wraps. However, a young man also walked by with a  greasy doo rag ,and a woman walked past talking on her cell phone, saying that she had to wear a scarf  because she hadn’t had a chance to straighten her hair. Those three images sum up the interpretations that come to my mind when I think of head wraps, a symbol of cultural expression, a protective tool  ,and a means for some people to hide/ be forced to hide their hair.

The first interpretation as wraps as a mean of cultural expression definitely came from my mother. She used to wear scarves everyday, and she bought 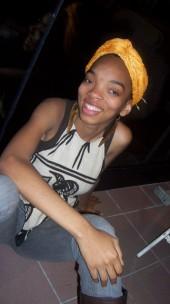 them wherever we went, and has quiet a collection. Once she changed jobs she started to wear scarves less and less because they “weren’t work appropriate”, Now she only wears them on special occasions.
The second interpretation is  influenced by my grandparents on both sides, they viewed hair wraps as a means of style protection only to be worn inside. My grandparents did not approve of people wearing them outside, and often criticized my mother for doing so. As a result I have some reservations about wearing them outside, I understand that my grandparents had outdated ideas, but I also see some people who wear doo rags and bandannas in inappropriate fashions and at inappropriate times.
The third interpretation connects to the image of a female slave wearing a head wrap, I had initially been told that they did so because as slaves, they did not have time/ the supplies to do their hair. Then during a Black women’s history class I learned that legal codes existed that forced black women to cover their heads . I think that the notion that  one has to cover nappy hair in public continues today, I had a friend in high school who never came to school with unprocessed hair, the one day that she did, she wore two hair scarves so no one would see her naps.
I am not ashamed of my naps, and wearing scarves does not mesh well with my personal style, but I understand the beauty ,elegance ,and culture expressed through wearing scarves. I am privileged to be able to make the decision to wrap or not to wrap my hair. I did a lot of thinking in preparation for this challenge. I decided to wrap my hair, but to allow a portion to stick out as a tribute to the women who had to cover their hair. I took my pictures at the Pan African Film Festival in the clothes I wore their that day.