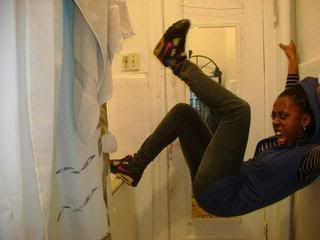 When did you start relaxing, when and why did you stop?

was the most difficult part of your transition?

Ever walked through a local department store and saw

those pretty little black girls on a box of perm and was in awe. Neither a stubborn strand nor a split end ever popped off the heads of those pretty smiling faces. So at a young age-around 9 or 10- witnessing this I wanted to have straight long hair like those of the little girls and have a smile just as bright as theirs. I was tired of the thick hair I had that never stayed down and took hours to braid. With eagerness and excitement I (not my mom or anyone else) took my allowance  money and bought a box of kiddie perm and had my cousin perm my hair.

A couple of years later my hair was short and was damaged. It was broken at the roots and was more difficult to comb than before I had a perm.  Despite it being damage my sister in law helped care of my hair and permed it. It grew pretty long, but I hated the burning feeling and the smell of chemicals being in my hair. Finally my mom asked me if I wanted to go natural, and after being through so much and still having one perception of beauty, I said “NO!”. By this time I was in high school and was still surrounded perm heads everywhere. I knew changing my hair would not only bring questionable looks and comments, but would have an effect on my esteem as well.

One day I realized that I would not have a perm forever and would be in college and my sister in law would not be there to perm my hair anymore. SO I DECIDED TO GO NATURAL. I allowed my hair to be natural for a year and let the perm grow

out. My hair was half perm (the ends) and half natural (the roots), I kept it braided during the transition process a

nd finally decided to cut it. I went to the saloon December 13, 2001, cut my perm ends and started my locs. This was the most difficult part of my transition because I was accustomed to having long hair and not everyone admired locs, especially my peers. I knew I would hear a lot of criticism and questions about my locs but it did not matter because I did this for me.

What was the happiest moment?

During the locing process the support and encouragement from other nappturals and my family is still the happiest part of being natural. There were two instances where I felt more comfortable and proud of being natural. The first instance was When I watched Mireille Liong on a the B.C.A.T station elaborating on natural hair and it’s myths. She promoted and supported natural hair and proved that natural is beautiful. Second, was when I found Nappturality.com, on the site people from all over with hair like mines and issues I have gone through helped me!

Now with such support and advice I wear my hair as a crown of glory and with confidence and that makes me happy.

What do you want people to know about you.

Lastly about moi, I’m a energetic, funny, open, focus, honest person. I’ am a junior in college majoring in Art History and Africana Studies. I’ am also a dancer, I participate in African dance contemporary and folklore, more folklore than contemporary. My family is from the beautiful twin islands of Trinidad and Tobago which cultural influence also played a dynamic role in my natural lifestyle. My family believes in taking care of oneself and being happy with who you are. Also, I love to learn (I’m such a nerd) and volunteer .I recently volunteered in New Orleans, LA for Hurricane Katrina victims. I believe we should all come together whether here in America or any where else and help one another, because human suffering is human suffering anywhere- I’m really passionate about that.

I would consider myself an unusual beauty- I’m kind of tall, with huge eyes and locs that are usually in a style whether it is a crown bun or Mohawk, any and everyone usually knows me by my locs (and as the girl with the difficult African that’s hard to pronounce lol!) . I rarely see natural models in magazine or talked about in the media and I would love to set the precedent of being a napptural and take it above and beyond the level it is at now. Having an opportunity to be apart of this competition brings light to all natural beauty and it’s versatility of the modeling market. So vote for me as Miss Nappturality and I will represent every single one of us Nappturals and take us above and beyond with energy, versatility and class.