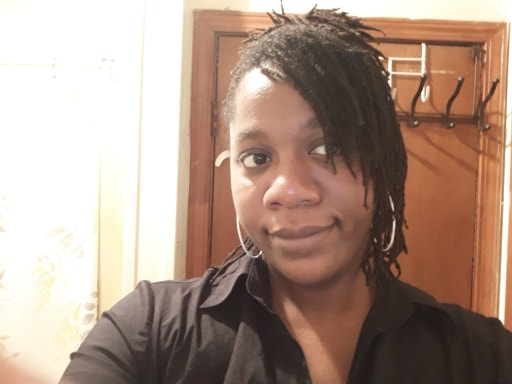 These days, you don’t have to look hard to find stories of hair discrimination against African Americans. From elementary school children to adults in the workplace, African Americans are consistently targeted for how they wear their hair. Especially if it’s worn in various braided styles, locs, or a loose afro. African Americans are the only race where their hair is deemed unkempt and unprofessional if it is not worn in accordance with European standards – bone straight. While one can trace the reasons why back to slavery times and beyond, the issue remains that hundreds of years later this problem still exists. Not only does it still exist, but some in the African American community has taken on the same belief that African American hair isn’t presentable unless it is straightened chemically or by heat. Going-Natural had the privilege of speaking with LaShawn Buckman who was recently discriminated against because of her locs during a job interview.

GN: LaShawn, Going-Natural.com came across your story of loc discrimination from a post you made in a loc group on FB. Thank you for taking the time to speak with us. What was the position you interviewing for?

LaShawn: The position I was interviewing for was a correctional officers position.

GN: Give us a little background on the job interview: Who interviewed you?

LaShawn: The person who interviewed me was an African American woman who actually was wearing very long braids.

GN: At what point during the interview did you feel things taking a turn for the worst?

LaShawn: I feel it took a turn when she asked if I would consider cutting my locs, and I said no I would not. She then informed me that they were against the dress code.

GN: That’s interesting considering she was wearing very long braids herself. Do you know if the company’s employee handbook or the general industry states that locs are a violation?

LaShawn: I am not aware of any rules stating locs are a dress code violation for corrections officers.

GN: Have you seen or know of other employees in similar positions within the industry that have locs or braids?

LaShawn: I have not seen any other employee with locs, but it seems braids are apparently fine since the person interviewing me had very long braids.

GN: Have you taken steps or thought about taking steps to fight this? (i.e. seek legal advice or filing a discrimination complaint)

LaShawn: No, I have not thought about taking any actions to fight it.

GN: What advice do you have for those who may be discriminated against by a job because of their locs or natural hair?

LaShawn: My advice is if any job feels you can’t do your job because you have locs then it’s not the job for you. That’s why I’m not fighting their decision to not hire me. I don’t want to work for a place like that.

GN: Even if locs are against the dress code for a correctional officer or any other job, why do you feel they should change that rule?

LaShawn: I feel they should change that rule due to nowadays many people are now taking the loc journey and if braids are allowed locs should be as well. They aren’t any different except braids come out and locs stay in.

LaShawn: Yes I would be willing to bring awareness to this situation, and I hope my story helps someone else out there.

GN: Thank you for your time, LaShawn, and we also hope your story will be an inspiration to others. We wish you well in your future endeavors.

Going-Natural did some research on the hair and grooming requirements for correctional officers. These are general rules that were found on http://www.correctionalofficertraininghq.com/grooming-standards-for-correctional-officers/. Here are some interesting findings from this website:
1. Male: While there is no Correctional Officer Haircut that you must have, your neat and orderly appearance will speak volumes on your competency level to supervisors and the rest of your coworkers. Basically no extreme hairstyles (mohawks, spiked hair), outrageous colors, or hair below the collar.
2. Female correctional officer hair should also be neat & clean, preferably pinned close to the side if needed, and not extending to far down ones back. Items normally used to restrain hair would be allowed if they remain basic and simple.
It should also be noted that the rules for dress and grooming can vary from state to state, but they each hold to the standard of men not having hair past their collar and women being able to have longer hair – as long as it’s in a bun or neatly pinned to the sides. We were not able to find any specific rules against locs, dreads, or braids for female correctional officers. We hope to bring awareness to issues of hair discrimination, and we will continue to bring these issues to our audience to spark change everywhere.
Share on Facebook Share
Share on TwitterTweet
Share on Pinterest Share
Share on LinkedIn Share
Share on Digg Share
Send email Mail