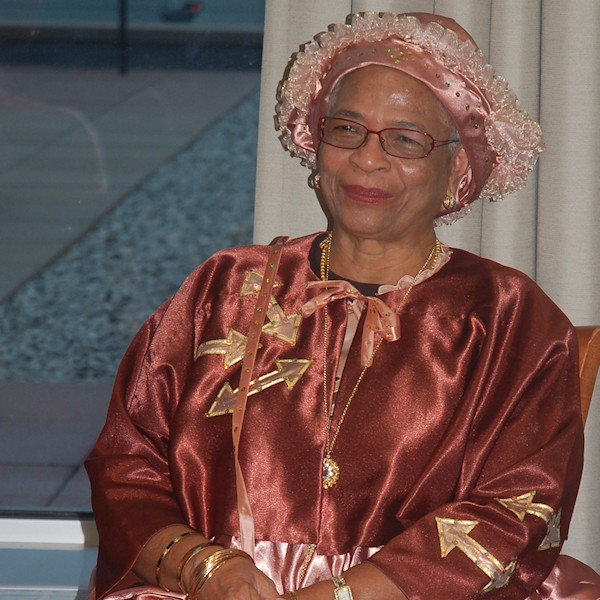 Mrs. Venetiaan is the first First Lady of the Republic Suriname who wears her hair natural. She is admired for her loving, kind and inspiring spirit. I couldn’t resist asking her about her beautiful short natural. Needless to say I am very thankful that she agreed to cooperate. Read along and you’ll see why. 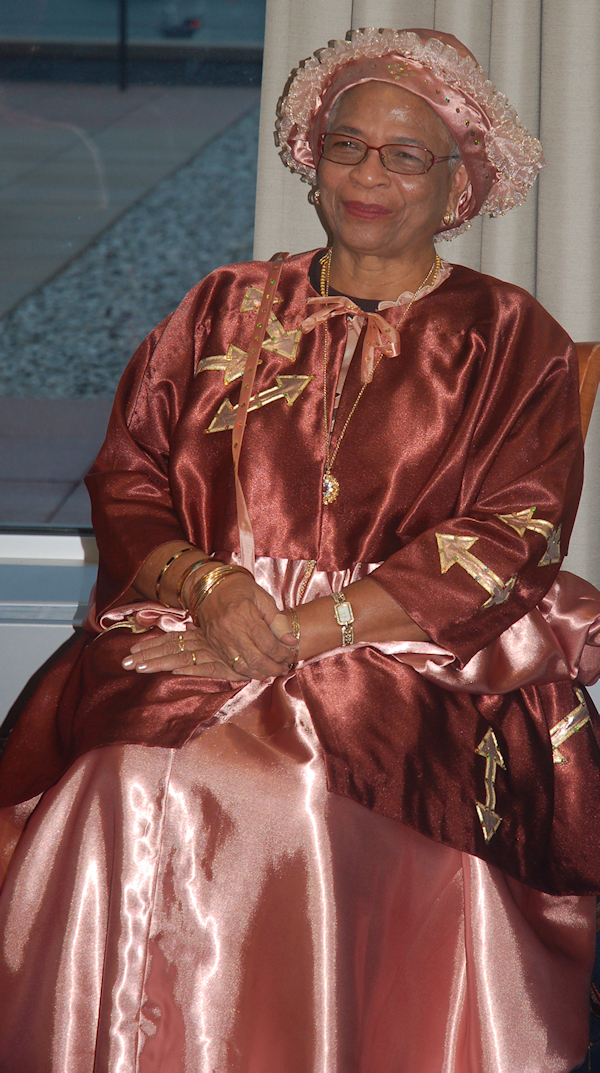 Mrs. Venetiaan, ever since I know you, you’ve worn your hair in a short natural. Didn’t women used to press their hair when you were younger, have you ever worn your hair pressed?
O yes, I used to press my hair. I started doing it at the age of 15 when I went to college. I thought I was too old for braids and ribbons.

Who pressed your hair?
My sisters did it in the beginning but I soon learned how to do it myself.

How was it back in the days? Did your mother press her hair and how did your grandmother do her hair?
No, my mother didn’t use the press comb at all. A few times her girls, me and my sisters, got her to get her hair pressed. That was on her 60th and 70th birthday, but she just wore her hair natural.

When and what made you start relaxing?
When I moved to Holland I started to relax my hair, at the age of 19 or 20. For the so called “convenience” of it. It saved me from struggling with the press comb in my cold little garret. I was living in a garret while I was a student.

For what period of time did you relax your hair?
Well, I did it for years until I experienced severe hair loss after the birth of my son. So from 1962 till 1970 I relaxed my hair.

Did you stop because of hair loss?
In 1970 I consciously went natural, also because of the severe hair loss I experienced. Three weeks after my son was born, I relaxed my hair because I wanted my hair to be “neat” for my father’s birthday. That was probably too soon. My hormones might still have been imbalanced. My hair loss was so terrible, it was scary. First, I bought a wig but after a couple of months I had it with the wig.
In the mean time I had read about the Black Movement and the slogan “Black is beautiful” appealed to me. Also and especially a book with speeches of Malcolm X had an impact on me. I was very moved by a speech where he spoke about the problems of the blacks in-depth, saying that we naturally degrade and belittle everything of ourselves, because we learned to hate ourselves as slave descendents. He was was pleading that we ourselves had to change this by taking action. Well, my action was cutting of my hair and choosing to wear an afro. Fortunately, my husband completely agreed with me and in January 1970 I invited the barber and he cut my hair off. I wear an afro ever since. 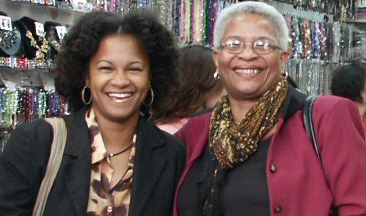 Cutting your hair short was quite radical. What was the response of other family members?
In those days the afro’s weren’t so teeny weeny, I could make little braids at night. My parents, especially my father,  didn’t like it. But he didn’t say anything because I was a grownup  married woman. As I said, my husband supported me, my brothers and sisters were not thrilled, they thought may hair was defiant.

Your decision to stop processing your hair was a conscious one. What do you think of relaxers now?
I think it’s unnatural and many women can’t handle the processed hair to well. As a consequence you see dry hair, breakage etc.

Still, relaxing is here to stay. Why do you think people will always have the urge to straighten their hair?
The western beauty standard is very dominant in our culture. Straight hair is every where, in commercials, magazines and on TV, so it has a huge impact. My own children were always playing this game when they were young, between 4 and 10, putting blankets on their head pretending it was their hair, sweeping it from left to right. This sweeping was the exact same thing you in the commercials. No matter how I tried, I just couldn’t explain to the children that their hair could never act like that because of the structure and its texture.  It was then that I realized the impact of commercials on people’s behavior. Before you know it your part of it. Of course, in my case, I kept educating my children, letting them know that I would never relax their hair.

And how did it affect them? How do they wear their hair now?
I didn’t enforce a decision upon them. I just told them that I would never relax their hair for them. They could choose to do it but I would only permit it after they were 18. My two older daughters choose to wear natural styles during their teens, but my youngest persuaded me to allow her to relax her hair at the age of 14. She is still in the cycle of relaxing, breakage, braiding, healthy hair, relaxing etc. But now she’s old enough to make her own decisions.

Is there a difference in why girls want to relax their hair nowadays compared to back in the day?
No, I don’t think so. The fundamental reason is (of course not true) that: nappy hair is hard and unmanageable and you are not beautiful or trendy if you wear you hair natural. That’s why women choose to straighten their hair. To make the hair so called manageable and easier and they think it makes them look prettier.

Was this also the reason you started to press your hair?
When I started, I didn’t even think about it. It was not a conscious step, I was just going with the flow: big girl, bigger school, no more braids, so press the hair. Also, my sisters initiated it, I didn’t even have to ask for it. Thinking about these choices only came later in live.

Women are so used to pressing and relaxing and they start doing this for their youngsters at an even earlier age these days. As a consequence there is a whole generation that doesn’t know how to handle natural hair. This generation won’t be able to handle their kids’ hair. Is there a way to break the cycle?
I am not too worried about this. The fact that afro-styles are in fashion these days is one thing that will make people specialize again in braid styles. I see more and more teenagers with braids and the fact that boys also wear these styles helps.

Some women say that relaxing has nothing to do with wanting to be white. What is your opinion?
I don’t agree. I can understand why people say this but when you read Frantz Fanon, you think differently.

Can you explain?
Well, I also believed it in the first place but after I read Frank Fanon’s analysis, I started to doubt my reasons. I think you should read the book yourself and see what you think about it. What he is saying is that 300 years of slavery affected us so deeply that we learnt to hate ourselves so much, that we try to become like the white slave master. You know how people used to say that you should never marry someone darker than you? Well, that is an example of such behavior. Fanon say’s that if you keep denying that you want to become like a slave master, you will never change but if you admit it you can work on it. Kind of a healing process from the inside out.

You had 3 daughters and a job how did you manage their hair?
I combed their hair every morning. It’s really not that difficult, you get the hand of it quickly. People exaggerate when they say that natural hair is so difficult to manage.

Many mothers are saying that combing a child’s hair takes too much time out of their busy schedule and it’s no fun for the child either. That’s why they relax their children’s hair even at an earlier age these days. Can you imagine this?
No, it’s nonsense, an excuse. There are so many braid styles that last for a week. It must be possible to schedule braiding once a week. I think people should really be careful and actually warned because relaxing can confuse the hormones of a child, when the child still has to grow. So, I think it’s dangerous to relax the hair of a young child.

Your hair always looks nice and healthy. What is your routine?
I wash and condition on a regular basis and I brush my hair every day with a soft brush of good material.

How often do you go to the hairdresser?
I go to a barber every month or so.

What do you think about nappy hair? Is it different, or special or….
To me nappy hair is what God gave me and people from our race. It has special characteristics and you have to learn how to treat the coils. Our hair has been undervalued far too much and far too long and it affected our people psychologically in a very negative way. It’s time for a change.

What do you think of my book Kroeshaar? (The first Dutch book about Afrikan hair)
Your book is an eye-opener for many people, especially for the ones with nappy hair. I hope it will make our people think more carefully and hopefully it will lead to a more conscious choice when it comes to relaxing.

Natural for: over34 years