He loves his afro and what he needs to see from a woman before he marries her.

Hello Wesley. Thank you very much for taking the time to talk with Going-Natural.com.

You hardly need an introduction but for the few who don’t know you, can you please introduce yourself? Where did you grow up and go to school?
My name is Wesley Jonathan. I grew up all over Southern California. I went to Chatsworth High School in city of Chatsworth, CA. I graduated from home studies.

How and when did you know that you want to become an actor? What was it that made you want to be one?
I didn’t know or think I was gonna be an actor. I thought I was going to be a singer and a dancer (Michael Jackson) is who I had in mind. He was and still is my inspiration for a lot that I do. Acting kinda fell into my lap at a young age. I liked it so I nurtured it and learned to love it as I continued.

You have been in quite a lot of movies. How do you decide what which one you want to do? And why Speed-Dating?
I decided to do Speed-Dating because I read the script and thought it was pretty funny. Also attached were a few of my fellow acting friends.

Obvious question; did you ever speed date yourself? Please share.
I have never experienced speed dating in real life.

In real life what do you think is the hardest part about dating? And the best part?
Well to me there’s a lot of hard parts about dating but I guess one of the hardest is to be yourself out the gate. Naturally we as people tend hold back certain things about ourselves, understandably. So ultimately, being comfortable I guess.

I have only seen the trailer but it seems like such a funny feel good movie that I wonder if it was also so much fun and easy to do for the actors. Was it easy/fun to do for you?
Working on any set has it highs and lows. At times we had a lot of fun and at times it was jus what it is, WORK. I always enjoy working with my friends and meeting actor/actresses I don’t know and haven’t met. I love to work period.

You played all kinds of roles and I assume that makes you grow as an actor. What is the toughest role you ever had to play and how did you manage to do it?
Um…I honestly feel I haven’t met my toughest role yet. I wish I could answer what has been so far but, I really can’t. I think that role is gonna happen with the next project if all goes well. I am doing a film with Evan Ross called “Four To The Floor” Its a film about friendship and dance being a dream and outlet for the troubles of four friends essentially. My character I can’t discuss about because it will give a lot away. 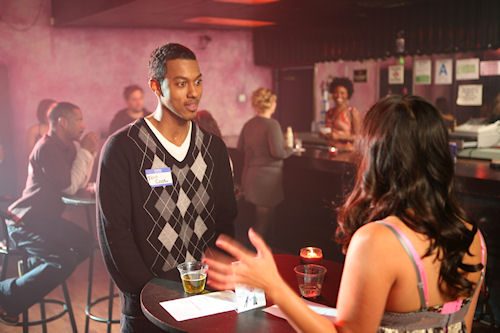 Scene from the movie Speed Dating

What did or does acting teach you? Acting should teach one how to LISTEN. Although, I am still trying to master that in real life. I am getting better. Acting isn’t jus saying words that you memorized. Its about listening and reacting to words that are being said to you. I tell people who ask, how do you act…? Don’t. Be honest.

How did living in Germany impact you as a person? I read that being Black in the US is different from being Black overseas. Can you please share your experience?

How is being black in Europe, in this case Germany different, from being Black in the US or is it? Living in West Berlin, Germany as a young kid for only four years jus showed me that the world is a very BIG place and that there’s so many people to reach and touch.

Going-natural.com is very much about hair so I have a few hair questions and hope you don’t mind. How important is hair to you?
Hair is pretty important to me. It is part of an appearance and a piece of up-keep to ones’ self.

You have had many different hairstyles during the years in the different roles that you played. Of all of the roles, which one was your favorite hairdo?
I have had a ton of hairstyles in my life and on screen. 1 of my favorites is my afro. A lot of the times people think I wear a afro wig in projects that they see it in, but not once have I worn a afro wig. Every time you have seen my afro on ANY project it has been my hair.

Do you think hairstyles in movies and video clips play into stereotyping? Please elaborate. My afro tends to grab a lot of attention from all races all over. I don’t know why but it does.

I think most men have at least one hair disaster or embarrassing story to tell. Would you care to share one with us? Maybe tell us about your worst hairdo? I would say my least fav hairstlyes would be a fade on my sides and long on top, wearing a ponytail. Just plain hideous. The other is same fade, same length on top but braided. Lol. These hairstyles were worn on “Sister Sister,” “Moesha” and a show called “Boy Meets World.” Probably some other shows I am forgetting.

Sisters are very sensitive when it comes to hair and generally think that men, Black men don’t like natural hair. Especially not a short natural. What is your take on that?
Yes my sisters are very sensitive about there hair. Here is my take, u can have a natural but it still can be done and well-kept. I don’t mind short hair, natural, etc. Long as you look good wearing it. I think weaves and extensions are great for a change up of looks but when a woman feels she can’t come outta that in front of me, it’s a lil much. Women have it hard, I know speaking from experience of growing my hair extremely long. It’s WORK and aggravating to do everyday. But hey no 1 said being a woman. Especially a black woman was easy.

Do you or did you ever wear a headscarf? I have dated and have worn a scarf if I can’t get my hands on a wave cap.

I ask because headscarves also seem to be an issue for some. In a recent interview T.O said “The women that I date, they don’t wear scarves to bed. … You look like Aunt Jemima in a candy store.” I personally don’t wear a head scarf and I don’t think only Black women wear scarves to bed but would that be an issue for you? I have dated and seen woman wear scarves and I think its fine and doesn’t turn me off AT ALL…Shoot getting your hair done is expensive and a scarf or wrapping the hair up ensures it too last a lot longer before it needs to be re done. So ladies wrap up the hair before sleeping, if u feel the need to preserve whatever style it is. I understand and am all for it.

You have portrayed quite different characters now. What other roles would you like to play? What draws you to a character?
I would like to play roles that cause for me to change my appearance other than my hair. Weight, eye color, monster make up, cancer patient, AIDS patient, Accents etc…

What is your goal as an actor? Who is your inspiration? A goal of mine as an actor, is to continue to be consistently working and effect in some way those who r watching me. Making you laugh, cry, happy, feel good, mad, dislike, all of that. I like when some1 one comes up to me and says, “hey I didn’t like you in a particular project, because u were mean”…I don’t get offended, I think that I did my job and sold the fact that what I played the person who watched it BELIEVED it.

On IMDB I saw that you also work on “The Obama Effect.” Can you tell us more about the project?
The Obama Effect is a story about a man obsessed with helping make history. Its like the movie crash where a lot of the stories intertwine, but with the the election being a center piece. How Barack’s running and being elected president effects every community,…homosexual, white, Black, Latin, etc…I play the son of Charles Dutton who has this obsession. However I am a republican who is voting against Obama…so its definitely a trip, and my character which I love won’t be liked much, lol.

Look out for the films The Obama Effect, B Girl and go see Speed Dating. For my supporters u can contact me on twitter/wesleyjonathan. Much Love God Bless!