Home » Weaving through the Kinks; A Natural hair day at Brooklyn College

Weaving through the Kinks; A Natural hair day at Brooklyn College

Yesterday Brooklyn College held its 2nd annual Women of Color and Identity Conference in the Gold Room of the Student Center. Men, women, natural, relaxed and weaved heads came together to discuss the topic of Black hair from different angles.

First on the agenda was the Going Natural Video Diaries, my documentary that pictures the natural hair movement in motion. The half an hour feature opened up the dialogue on the day’s theme: Weaving through the Kinks.

The whole goal of my documentary is to capture the natural hair movement while it’s happening to see how we as a people connect, how we relate and what transitioning to natural hair teaches us.

So after the film, even before the audience got a chance to ask me questions, I opened up the floor and asked the students if and how they could relate to the hair stories shared in the Video Diaries.

The first things one of the young women said was the two texture struggle and the breakage while going natural. Now that is one of the simple practical things that connects us because everyone goes though this while  transitioning  and it was good to see how all of us could relate to it. 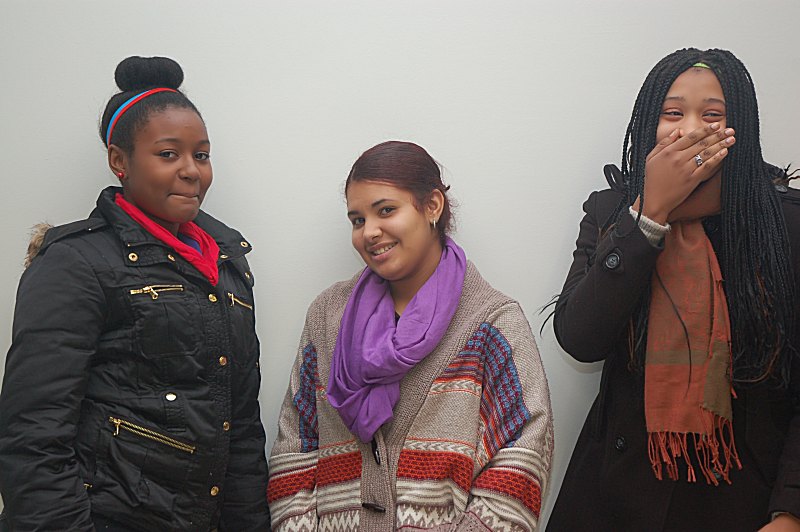 Students having a good time!

It wasn’t a one way conversation though, the audience was very engaged and so smart before I knew it I was answering their questions and talking about my own journey. I guess that’s what you get when you go to colleges.

When I answered that I thought that it is the mental part of transitioning that is the hardest part of going natural, Brigitte Turner Actress, Model and Filmmaker backed me up with a story that got everyone quite for a second. A woman told Brigitte that her husband left her when she took off her wig. 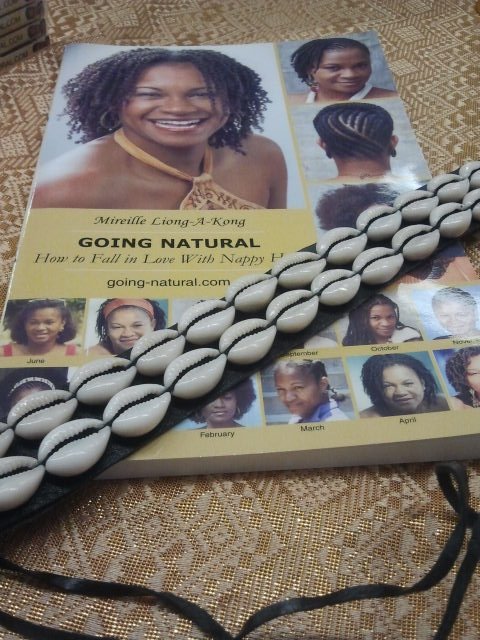 The Going Natural Giveaway for the Day.

As you can imagine it stirred up the conversation and brought it to yet another level. We could have gone on and on but it was time for the next topics on the agenda: Lurie Daniel Favor’s Keynote speech followed by performances and panel discussions.

By now you probably know that Lurie, the nappy headed lawyer, as I call her, is one of my favorite people. Not just because the picture I took of her inspired her to write Afro State of Mind which definitely makes me incredibly proud but it’s way more than that. It’s because Lurie is super smart, very passionate, very well spoken, has an incredible head of 4C hair and is gorgeously looking and in spirit on top of that. 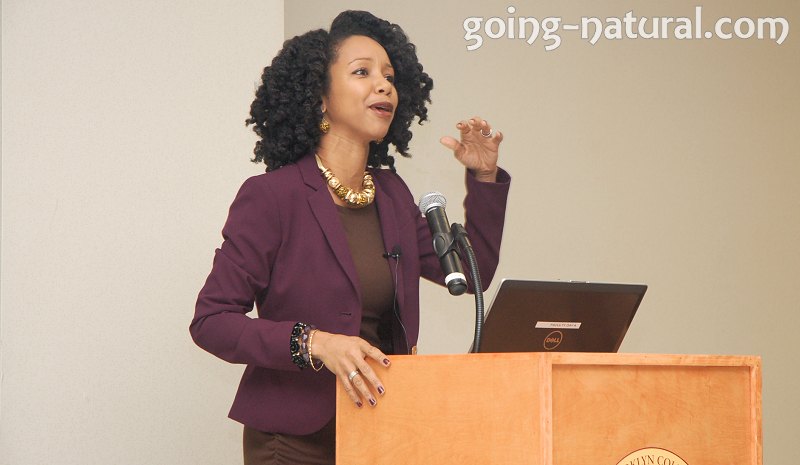 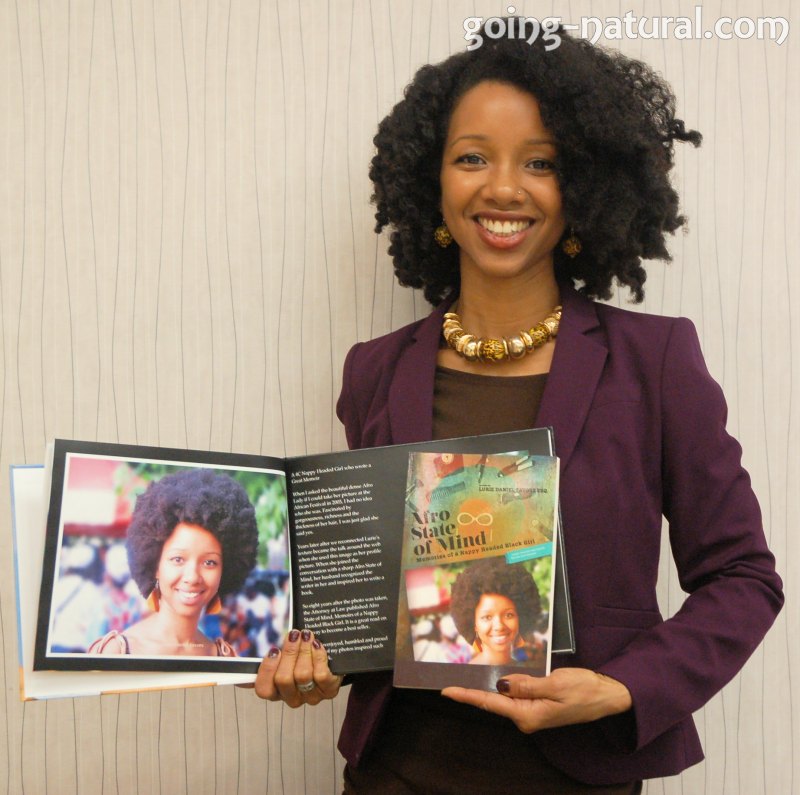 As expected Lurie’s spirited presentation got everyone exited. She inspired students while answering their questions then before you know it, it was time for the Steppers and the Slam poetry performances.

All performances were fantastic as was the food that had arrived. The cozy yet inspiring environment was a huge contrast to the cold and rainy outside. I was so happy to be there, to be invited. Organizer Benewaa did a phenomenal job putting the event together.

An all male panel of five from a loced head to a bald headed one, did a good job answering questions from hairstyle preferences to stereotyping gender roles in relationships. What stood out for me was the man in the middle who explained that he had to get used to the natural look because he wasn’t exposed to it. That is something that a few men also state in the Going Natural Video Diaries.

The all female panel was last on the program with familiar faces from the natural hair world. Diane Bailey, one of the first to open a natural hair salon in Brooklyn,  Karen Tappin, owner of Karen’s Body Beautiful who also sponsored gift bags, Brigitte Turner  and Janel Stewart, from her Kinky Curly Coily blog with her adorable little daughter.

These smart passionate women made the audience laugh and gasp at the same time, answering questions from basic hair care to the lack of cultural awareness beyond black follicles.

What stood out for me was Karen sharing the story of a straight hair woman who just could not understand what all the fuzz about Black hair was all about. When the owner of Karen’s Body Beautiful asked the woman to imagine that she and her would be rejected at work and in school just because they had straight hair, the woman just dismissed it as a crazy idea.

This story made me realize once again that while we are making progress and we’re having fun doing it, we still got a long way to go. 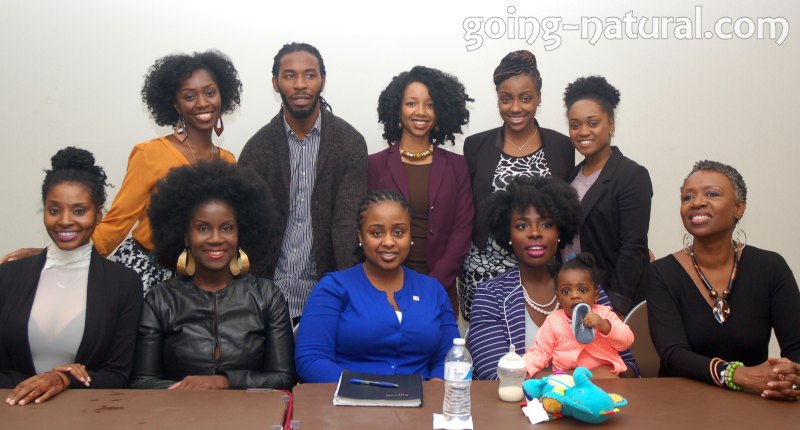