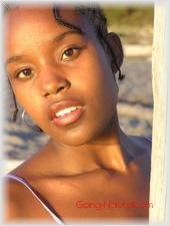 My parents raised me to love myself and my mother always instilled in me the beauty of my hair. She would tell me how thick, beautiful, and healthy my hair was EVERY time she did it. She was never frustrated or complained about doing my hair and always told me it was fun for her and that she loved to style it; it was an art. She changed my hairstyles frequently and always decorated my hair with beautiful things; she said I was royalty. I went to predominately white schools and she’d tell me how special and unique I was because I didn’t have stringy hair like the other kids and how they couldn’t do styles like mine, but I could do styles like theirs. She even pressed my hair a couple of times just to show me that she was right about me being able to wear my hair in any style possible.

That’s why I was devastated when I received my first relaxer in the 4th grade.  It was a secret birthday gift and my mom didn’t tell me about it until we were at the salon. She said that it would make my hair more manageable, yet I was appalled when I saw the results. My mom had raised me with so much love for my hair that this was the worst thing she could have done to it. I cried and cried and hated my new hair; I felt that she had ruined it! It was stringy and completely undesirable in my eyes. Luckily it was one of those “old-school relaxers”, and since it had only been applied once, it didn’t totally strip my hair of its natural texture and I was able to return my hair to its natural beauty without having to cut it off and start over again.

Fast forward, to the 8th grade. It was spirit week, the last week of the school year where every day of the week is a theme day. It was “blast from the past” day and I had my mother do my hair in a huge Afro, I also wore my dad’s old dashiki. I thought I was looking too cute! When I got to school everyone was amazed. This one boy with an Afro wig asked me if I would trade him wigs, I told him that this was my real hair and he said “oh… cool hair,” but being the sensitive 8th grader that I was, I took his comment as offensive and that’s when my down fall began. The whole rest of the day my classmates were throwing things in my hair, trying to stick pencils in it to see if they would stay, and other things I deemed to be horrible. By the end of the day I was crying and I went home and told my mother that I wanted my hair straight. I never told her about what had happened that day and how I thought the kids were making fun of me. It wasn’t that I wanted to look like them; it was that I didn’t want them to tease me for standing out so much. At the end of the week, after taking my yearbook around for signatures, I realized that my classmates weren’t trying to make fun of me and that they really did like my hair. They had written comments in my yearbook for me to wear my Afro again, but by then it was too late. For the next 7 years, I continued to relax my hair, without ever questioning my actions.

Every single time I got a relaxer, no matter what I did I would always get chemical burns. I tried to stretch my relaxers for as long as I could so that I could avoid the burns, which caused me excruciating pain. After I left the shop, the first wash was always a nightmare. My scalp would be trying to heal itself and my head would burn when the water touched the spots with the soars, my hair would stick to the scabby melted flesh and the pain was unbearable. It didn’t matter if I waited a week or longer to wash my hair, it still gave me the same painful results and I never got accustomed to how limp my hair became.

Although I endured this great pain, I still never questioned my actions. That is, until the day when I went to my hairdresser for a retouch about a month after my 20th birthday. I had tried to take care of my hair the best way I knew how, by drenching it with moisturizer. I also still had a few braids in it from the tracks I had just taken out of my hair. I never knew that this day would change the course of my life. When I sat in her chair she immediately began to tug and pull at the braids to loosen them. She then grew impatient and started cutting them out! I was aghast, but being the meek person I was, I didn’t say anything. Next thing I knew, she was yelling at me about all the moisturizers that I had been using on my hair saying, “If you want to treat your hair like this, you might as well be natural!” It was then that I thought to myself, why am I doing this? Why don’t I go natural? That was the seed that transformed my life. That was also the last relaxer that I ever received and from that day forward I began my transition.

As my hair grew out, I put it in two-strand twists to mask the texture. It was my junior year in college at the time and I didn’t have time to braid my hair, so I just twisted strands of my hair together and call it a day.

I got a lot of compliments around campus, but now when I look at the pictures I realize that I looked a mess! The hardest part of my transition was mustering up the confidence to take the next step and do the BC. I didn’t have a preconceived set of time that I was going to grow my hair out before cutting it, instead I started working up the nerve to cut it ever since I decided not to put chemicals in it anymore. I talked to my mom, friends, professors, whoever I could to get support. My greatest fear was that I would look like a boy. About 4 months later, after feeling confident that I wouldn’t look like a boy, I asked my Aunt, who is a hair dresser, to cut the relaxer out.

My happiest moment was looking in the mirror after my processed hair was gone. I had some cute Bantu knots in and I looked great!

I didn’t realize how much confidence I was capable of having until I embraced myself completely. I felt like I was on top of the world. I never knew what I was missing before this moment. I felt powerful, dignified, in-control, and so regal. I felt magnificent but I still had a craving to learn more about how to care for my hair, that’s when I searched on-line and found Nappturality.

I quickly became a member of NP, but as a full-time college student, who worked and did extra-curricular activities, I never had time to actually utilize the resource. Therefore, I relied solely on my mom’s advice on how to take care of my hair until I got out of college. It wasn’t until my second year being natural that I rediscovered Nappturality.

I have learned so much since then. It was like my whole world changed. I had never noticed hair before, but once I cut mine and found Nappturality, my mind was transformed. I noticed beautiful women with natural hair and some beautiful women with unhealthy processed hair and my heart went out to them. My eyes were shocked open one day when a friend of mine came to me on campus and said, “I really love your hair, I wish I could go natural but my mom won’t let me.” I asked her why and she told me that she grew up with her mom telling her she needed chemicals to “fix” her hair. Another sista, from BSU came up to me a few weeks later saying the same type of thing. It really hurt me to hear these words; I had grown up in a completely different household where I didn’t have to think twice about it being “acceptable” to wear my natural hair. When I really started getting on NP, I learned the stories of other women and their hardships with their parents and society and how they were similar to the ladies that came to me when I was in college.

I want people to know that I am dedicated to changing the world in a positive way. I want to show people that black is beautiful, and that extends to our hair. It really pains me to know that we still have a lot of hang-ups in our society that extend back centuries. I am an entrepreneur, a model, an actress, and a dancer and I am starting with myself in order to make the world a better place. For a long time I hid a part of myself because I thought that’s what other people wanted, I will never again let others control my actions. I am enamored with my hair. People ask me if it’s a wig all the time now, and I’m at peace with that.

I would like to be widely known and recognized by people, through my voice and actions of reaching women and little girls who look like me and supporting them to be proud of their natural beautiful dark skin and thick textured hair. My natural look will give somebody hope, confidence, and encourage them to take a different course of action; to love themselves naturally. Sometimes seeing natural beauty is enough to help someone. About a year ago, I saw that friend of mine who came to me in college and said she wanted to be natural, and now she is natural. She came to me and thanked me for just being me. After all these years, I’ve finally reunited with that 8-year-old-girl who loved her thick & pretty hair I will never again go astray, I love my roots!