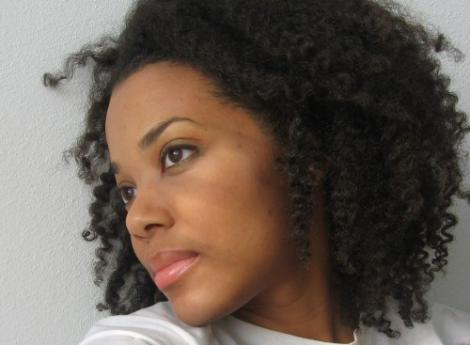 “Eventually I knew precisely what hair wanted: it wanted to grow, to be itself, to attract lint, if that was its destiny, but to be left alone by anyone, including me, who did not love it as it was.” – Alice Walker

“Eventually I knew precisely what hair wanted: it wanted to grow, to be itself, to attract lint, if that was its destiny, but to be left alone by anyone, including me, who did not love it as it was.” – Alice Walker

Hello and thanks for stopping by my corner to find out more about me!

My name is Stacy and I’m a seasoned napptural — August 2008 will mark six years since I last applied a relaxer to my hair. Now when I say seasoned, I mean my coils and kinks have weathered all sorts of life storms, disastrous styles and product challenges. We’ve been through the growth milestones and survived the testing stages. Thankfully, I’m now keenly aware of what my hair likes and doesn’t like. I have embraced my shrinkage, discovered my ‘holy grail’ products and successfully reduced my PJ habits.

Time really flies when you’re experimenting in a newly enlightened hair- love affair! –But I clearly remember my first relaxer as well as my last relaxer. They were both equally memorable rites of passage. I was taken to Ms. Celestine’s Salon for my first relaxer. She was my grandmother’s beautician. My mom took my sister and I together after she grew tired of us sweating out our pressed-out sunday-school hair. I think I was probably in the second grade. We left the salon with a permanent ritual set in motion and my grandmother’s coiffure — those tight little roller-set curls all over our head.

My last relaxer was some time in August 2002 and with a profound sense of accomplishment I cut the last inches of my permed ends in June of 2004 .

Giving up the lye was one of the best decisions I have made! I am so proud of myself for taking the journey. My nappy hair is longer, thicker and much healthier than it ever was in my relaxer years.

I had tried transitioning twice during college, but was talked out of it by my career mentors. One of my professors told me that nappy hair was unacceptable and I would have to get a wig to find a job. Although I had suffered a bald spot and had grown weary of fearing for the health of my hair I continued to perm it, because after all what else was there to do??? Having had a perm since childhood I had no knowledge of “what was on the other side”….so I continued to live the lye.

My final relaxer application really stands out in my mind … I was filled with so much dread as I slapped the caustic cream onto my fresh newgrowth. I didn’t keep it in very long. I had to stop and ask myself: ‘Why was I putting myself through so much torture and risking my health? -Why do I fear my natural hair so much that I choose to risk loosing it all to make it into something it was never meant to be?’

I’m grateful for being pushed to the point where I finally said *enough!* It was at that moment that I vowed to prove I could live without being a slave to the six- week touch up! At that time my hair was pretty long healthy and thick, and chopping it all off was not an option–I had invested too much time, money and many tears to get it that way. I was working in TV news and and I just couldn’t do anything drastic. Transitioning was the only route for me. I knew it would be difficult…I wasn’t sure what to expect, but I knew if I took it ONE DAY AT A TIME I would be okay.

My older sister was napptural, but I found new sisters online during my journey, and we helped each other step-by step. Nappturality is like a special sorority. We pledge to the napps and the hazing is letting go of the creamy crack! –And boy was I addicted! I used to perm my eyebrows to make them straight!!! (shhh! don’t tell anyone I said that!)

The most difficult part of my transition was getting past the three-month mark –that was the point where I broke down during the two previous attempts to leave the lye alone. –It was the point of growth where I was used to getting my “hit of the lye.” Once I got past that physical point, I knew I could keep going, and I was mentally ready.

My happiest moment was cutting the last of my relaxed ends — I had finally achieved a goal that seemed impossible for so long. I was even more delighted when my closest girlfriends and younger sister decided to take the journey too.

Yet, even greater than that is the joy that comes from wearing my napps out in a crown that is my glory, and proving to the world that: 1. Nappy hair IS beautiful. 2. There IS more than one style to do. 3. Nappy hair GROWS. 4. There are great products for OUR hair. 5. You CAN look professional. AND–6. What lies on the other side is NOT scary.

I tell anyone that is thinking of going natural that they can do it too. Just take it one day at a time. Looking back now it has been 2,000 something days since I decided to break from the lye — 2,000 steps toward freedom–and I’m sooo glad to be here! 🙂