The woman behind the Award-winning: MY Nappy Roots

Hello Regina. Thank you for doing this interview. Can you please introduce yourself to our audience? Where did you grow up and go to school?
I have a traditional Midwestern upbringing from the “Crossroads of America’, Indianapolis, Indiana. I attended Indiana University in Bloomington then moved to LA and went to a film program at Los Angeles City College. The school was fairly new, some of the professors taught at USC and AFI (American Film Institute) LACC was a hidden jewel in the community. My first accolades came in film school for my camera and lighting work, I was working as a fashion photographer while in film school. Afterwards I first started at B.E.T as a camera operator.

Did you always want to make movies?
I didn’t realize I wanted to make movies until I moved to California. I was always a very visual and creative person, I played several instruments most of my life. Even my friends told me I’m not surprised you are in film, you were always doodling?, I’d forgotten about that, I thought it was normal draw pictures and write little blurbs. When I discovered film, it was a natural medium for everything I loved

What attracted you about to making movies?
I remember watching he film “Apocalypse Now” at the Cinerama Dome in Hollywood. The CD theater had an amazing sound system, it was the opening scene of the film with the helicopters. I was hooked until the end of that film. Film, especially in a theater setting, has the ability to emotionally excite, uplift, scare or inspire. It’s the synergy of storytelling, visuals and audio or music; it’s powerful.

Virgin Moon is a reputable company that earned its credits. You’ve made several pilots for television for instance. That is different from documentary making. How and why did you decide to make a documentary and why this one about hair?
Producing a documentary is more of an unknown journey, it’s different from a scripted show because the more you research, the more you want to know. There’s a creative freedom that you allow to happen, so it’s not always a predictable story. You have to be a journalist and I think if you are telling a true story, you need to be able to tell the truth objectively. Even with MNR in the feature, they are a couple of stories I couldn’t tell because I didn’t have both sides of the issue. The good news is those stories will be addressed on the
feature DVD. When producing a scripted show or even reality shows you spend more time scripting, have a ideal for an ending. IA documentary is just a different creative approach.

What did you want to show in this documentary and how did you go by it?
MNR was revealed to me in stages. Like I mentioned earlier the journey of filmmaking. MNR is the journey of Black hair and it represents a personal journey of my education of Black hair while making the film.
The original 5 minute version and the award winning short :22 minute version is primarily about image and culture. The feature version included more about the connection of our African culture and the business story. While researching and shooting interviews one by one, it was revealed that this industry we birthed the greatest most innovative Black entrepreneurs in this country. 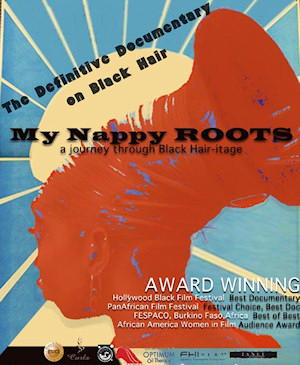 When and why did you decide to go natural?
I have worn my hair natural for many years, I started locking almost 2 years. I like what is healthy and easy, but being a creative person, I do to change my hairstyles. I’m in a tough stage with my locks now.

What do you think when you look at our hair today? Is it different from back then, the same, do we progress?
The processes of Black hair have changed, I love the variety, but sadly a lot of our minds remain in bondage regarding being able to express our Blackness in our hair if we choose, because of that we often discriminate among ourselves …

What was the highlight for you in making this movie? And a low?
They were many highlights, one when the impact of business story hit me. Meeting and interviewing Mr George Johnson (Johnson Products) for instance. While sitting with Mr. Johnson in his Chicago home listening to him passionately telling me his Black Story for hours. We were packing up to leave and he decided to share more. It was incredible to everyone on the shoot. Another highlight was getting an on camera interview from the CEO of Royal Imex (largest Korean hair manufacturers).

Lows were loosing 4 industry greats. Once people opened up to you, you became their friend. The lives of these people was total hair. Art Dyson, Josef Stevenson, Joseph Calloway and Mr Little , all time great hair Entertainer who died too early.

As a mother, what do you think we should teach our children about our hair?
My hope as a mother to my daughter is she will understand her true beauty and gifts and display them freely. Each person is meant to be different and sometimes others will not understand. She experienced this recently while living in Africa for 8 months, It was a disappointment to her, that the Senegalese did not accept her nappy afro twist, she settled into beautiful braids eventually, but the education of MNR definitely helped her to keep her nappy head high.