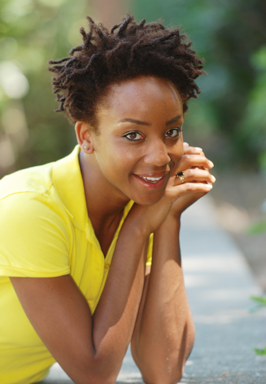 You may not know her name but you’ve probably seen her in Eric Benet video clip . This beautiful natural is not just any actress. She is an Electrical Engineer who choose to switch careers.

Let start from the beginning. I am sure most people know you but they may not know your name. So can you please introduce yourself and tell us; where did you grow up and go to school?
Well my name is Jamie Ann Burke, my parents got married and immigrated here from Guyana, South America. I was born in Lubbock, Texas because my parents were studying at Texas Tech University. But I’m really a California girl. At the age of 3 our family moved to Tustin, CA. I’ve been rooted in Southern California ever since. I always thought that Los Angeles was exciting so I decided to attend UCLA. I loved it there! After college I worked as a security technology consultant for Accenture and worked in Arizona, San Francisco, and Houston, Texas. Now I’m back in Los Angeles pursuing acting!

You are an Electrical Engineering Graduate from UCLA. What made you choose Electrical Engineering? What attracted you to choose this subject out of all others?
Well, to be honest my first two years I was “undeclared.” I had no idea what I wanted to major in. I took so many classes from religion, to communication, to anthropology. I was just exploring anything and everything. But then I took a PIC (programing in computing) class and I was soooo intrigued by how computer programs worked, and learning to write code was fascinating. I was going to major in Computing but a mentor of mine convinced me that I should learn the hardware as well as the software. So I started taking Electrical Engineering classes. Learned about circuity, waves, all sorts of things. I must say….it was one of the most mentally challenging times of my life. But I did graduated and I’m proud to say that I have earned my Bachelors of Science degree in Electrical Engineering with a Computing Option from UCLA!!!

Where you natural as a student?
As a student I was everything, from natural really short twists, to cornrows, to braids. I varied so much in my style and color of my hair, when I graduated I believe that my hair was a light brown dread-like style. Variety is the spice of life!

Many women wear wigs to go on a job interview because they think that they won’t be hired if they would wear their natural hair. What do you think of this? Where you natural when you applied for a job and was it easy for you to find a job after you graduated?
LOL, that is just not true, when I was hired for Accenture I had those light brown twists…but everyone thought they were dreads. I looked totally Rasta! As long as our hair in clean and styled we don’t have to hide who we are. The more I examine the hair situation, the more I find that its African American people who are unwilling to except their own beautiful hair. If we as a people accepted ourselves and our own uniqueness, others will see our beauty as well. We should say this word out loud “BEAUTIFUL” If you break the sounds down it says BE YOU unTIL you are FULL. We have to be what we were made to be. So, when you go to your job interview….be you. Dress nice, have a great attitude and do your homework on the company. They will love you, once you love yourself. 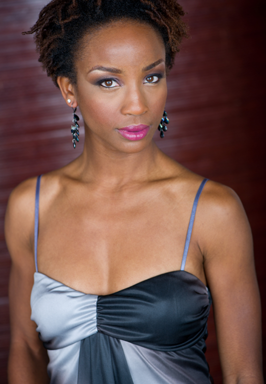 When did you go natural and is being natural a conscious choice? Can you please elaborate? When I went through a MAJOR life change from technology to acting I asked a hairstylist how I should do my hair. He (African American) immediately told me to get a weave on my head ASAP. So I did, I spent thousands of dollars on the latest “indian hair” and many , many hours have a stylists sew someone elses hair in my head. But the worst part was not just the time and the money, it was how I felt when people would compliment my hair. I would alway mumble…”its fake” and laugh awkwardly. Finally, I had to come to terms with myself, and realize I’m OK just the way I am. Every ethnicity is so uniquely beautiful and it would be boring if we were all the same, so I’m not going to go off of what I see on TV and the magazines, I’ll just be me. My hair is short, so I was afraid that people wouldn’t find me attractive. Though it is true I that I don’t get as many whistles or rude cat calls when I get by. When quality people are around me, they love my hair. So I’m just going to go for it. I’m really looking to break into television shows for many reasons, one of them being a certain agent who told me he couldn’t represent me because my hair was natural. Oh well, there will always be those who don’t see what could be, they just see what they are spoon fed. So yes, going natural was a very conscience choice, but I’m glad I made that choice.

You left your structured life as a corporate consultant to go into acting. Why? Where you missing something, did life became predictable maybe? And what attracts you to acting?
Yes, I left a lot of money and stability to get into acting. But I was always a shy person and a bit of a nerd, I love that acting got me out of my insecurities and it is so much fun. It’s like being a kid, everything you saw is extremely exciting, sad, angry…no word is unimportant. In my job I realized that I didn’t like talking about what I did, I was bored of just being someone else’s work horse. I wanted more fun, and adventure and acting provides that. 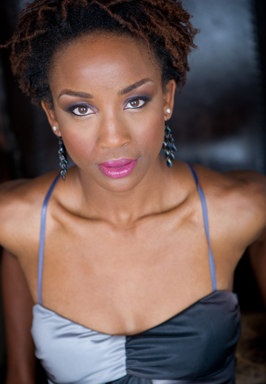 Now, there aren’t many roles for Black women in general is it even less for a natural Black woman? Do you think African hair is an issue in the film industry? Do you think Hollywood is ready for natural beauty?
Hair is a huge issue for black ladies in Hollywood. The entertainment industry is full of copy cats, for example roles are often described as “Halle Berry type” or “Zoe Saldana type” producers like things that are safe. If something was successful, they just want to copy that, they don’t want to take risks. But there are those rare gems that able to think outside of the box, and it’s a blessing to work with them! The world is ready for natural beauty, Hollywood just has to give them a chance. 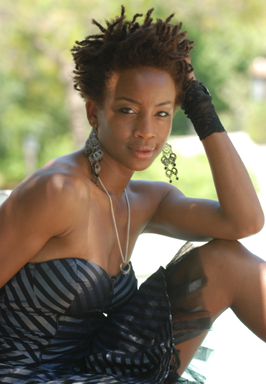 In a press release you say: “It is so rare that African-American women in the media ever get to portray their natural beauty.” Why do you think this is and what do you think needs to happen to change this?
Black woman have culturally being trained to think that their features are not as desirable as other cultures. To change this we just need more black woman to be seen in public with their natural hair. The more the public sees it, the more they are willing to accept it.

I love your style by the way. Where did you get it done and how do you care for your hair?
Thanks! I came up with the styles myself. Its usually a combination of twisting with a few accent braids. I use different products from Shea Butter to Soft & Beautiful Botanicals, to African Royal Super G.R.O. I’m open to new products but basically my hair need moisture!!

How did you get the gig in the Eric Benet video? It certainly looks great. Did you enjoy shooting it?
Thanks! I came up with the styles myself. Its usually a combination of twisting with a few accent braids. I use different products from Shea Butter to Soft & Beautiful Botanicals, to African Royal Super G.R.O. I’m open to new products but basically my hair need moisture!!

Who inspires you and why?
A lot of people inspire me. In terms of actors Will Smith (talk about someone who can do it all) and Johnny Depp (someone who takes risks in his acting.) Director: Quentin Tarantino, I’m in love with Kill Bill 1 & 2, a strong lady who kicks but and takes names! Political: President Obama, he has to deal with a lot but is managing it with dignity and class. Personal: My family and friends, they are so strong and supportive of me, it makes me want to succeed!

What is the movie about?
Dawg on Duty is about a girl’s unfaithful husband who is magically turned into a stray dog that she adopts and trains to be her faithful companion. To win her love and become human again the unruly pooch must perform three selfless acts of redemption. Written and directed by Ted Williams.

I know you are still relatively new to the industry but the way I see it you already did some great stuff, the video with Eric Benet, The Garden” with Michael Montgomery. What has been the highlight of your career until now?
I’m really excited about “The Garden” by directed by Michael Montgomery, produced by Anthony Hanna and David Wilson. It’s epic… like an African “Braveheart” or “Gladiator.” We bonded so much from filming together in our African attire. The rest of the cast are like my extremely talented big brothers (Keston John, Frantz St. Louis, Darryl Anthony Harper, Ron Bush), we are so close. This film is going to all the big festivals. I’m so excited about it.

How about theater? Is it likely we will see on stage? Any time soon?
I’m focusing on film and TV for the moment but one of my favorite acting moments was in a play called “Soldiers Don’t Cry.” by Layon Gray directed by Kaidy Kuna. I met one of my best friends Doan Nguyen from that play! When I’m more established I will definitely work the stage again.

Are there any roles that you would really like to play? Which roles and why would you like to play them?
I would love to be apart of something like “The Game of Thrones” its so amazing. I love the historical fantasy adventure stories. I’m also really into improvisation so a comedy show like “The Office” would be a dream.

My goals is to act in awesome films and TV. I would love people to recognize my range and would love to morph into each character completely like Johnny Depp.

Where can we see you next?
We are finishing up “The Garden” this week so next year it will be in festivals! Also at the Burbank International Film Festival, they are screening “Barracuda” a femme fatal grindhouse style movie, which I’m in!

What is The Garden about?
The Garden is inspired by creation stories, such as Adam and Eve. It paints an portrait of life at the dawn of modern civilization, a time when mankind no longer simply lived off nature as it provided, but instead took efforts to alter nature for their own survival. It’s the time when that very first spark of imagination tempted our ancestors to be more than what they had been, and gave a few of them the courage to stand up for a brave new future. But at what cost? Written and directed by Mike Montgomery.

Do you have a final word to the members of going-natural.com?
Love yourself and others will follow your lead!