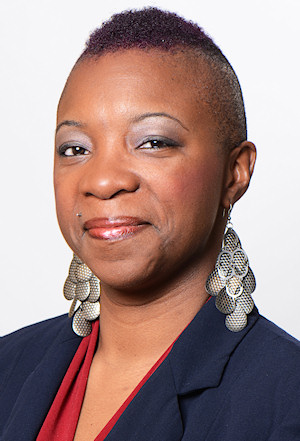 I have to say that every week the models get better and better. I am very impressed with the ladies and how they each have stepped up their game and continue to bring their own individuality and creativity to the challenges. Each of you is a MUSE to me!  My first choice for this challenge is Chassity followed closely by ReShonda.

I chose Chassity as my first choice because I feel that she really brought out fierce in her photos. She looked like a businesswoman, large and in charge. Her outfit was classy as was her makeup and her hair. I can easily see her photos in a high fashion magazine or on a billboard!  What I would have liked to see was a little more fierceness to her makeup. It was classy, but in this instance I would have liked to see a little edgy to really set her fierceness off.

ReShonda did an excellent job of portraying the natural muse.  Her makeup was very light and refreshing, her hair poof was light and fluffy making me think of a cloud on a summer day.  Like Chassity, I can easily see these photos in a magazine spread or on a billboard.  What I would like to have seen was a little different hair style to show that natural doesn’t always mean a puff or a braid out.
Nefertiti chose a slightly different route and showed a picture for each muse.  While I like her ability to relate to each of the muses, her lack of choosing one left her pictures looking scattered and not telling me a complete story. If you are going to be all the muses, your hairstyles and the complete picture layout MUST scream each muse. I didnt get that from her pictures. I feel like I got pieces of different stories instead of one story line.
Carlie chose natural as her muse.  I loved her hair choices and her relation to nature in her shots. The shots were very well thought out and gave me her story.  What left me a little out was her makeup. The makeup was too heavy for the I am Natural muse in my opinion. Her makeup was screaming I am Fierce, while her setup was screaming, I am Natural.
Desray chose Free as her muse.  With the I am Free muse, I would have liked to see her hair lose, a little wild, and blowing in the wind. I wanted to see how beautiful, healthy, and “free” her hair is and can be.
Kala chose Unique. I like that she had a picture and a description for each letter of unique. I would like to have seen more texture in her hair as it looks kind of like she straightened her hair for one of the photos.  I liked the creativity that she used in crafting her photos, but I do not feel as if her hair styling was strong enough and matched the various traits of Unique she was demonstrating.
Jalita chose Fierce as her muse. I love that she overcame her photographer challenges and still came up with nicely thought out shots. I was missing fierce in her photos though. The hairstyle and the makeup gave me more natural and the poses gave me more free than fierce.
My recommendation for elimination this week is Nefertiti. I chose Nefertiti because of all the ladies, I felt that her pictures did not tell me a story and that her lack of choice in a specific muse left her pictures scattered and disjointed.  I don’t feel as if her final pictures came across as polished and I just cannot see her photos being on a billboard or in a fashion spread at this time.
Tags: challenge, leanne