Talking about healthy food with the author of “By any greens necessary”. She used to relax her hair every 4 weeks before going natural.

Tracye McQuirter, MPH, is a public health nutritionist, author, and twenty-year vegan who leads worldwide seminars on vegan nutrition. Her new book is By Any Greens Necessary: A Revolutionary Guide for Black Women Who Want to Eat Great, Get Healthy, Lose Weight, and Look Phat . Tracye has been featured in dozens of media, including Ebony, Essence, The Washington Post, The Tavis Smiley Show, Fox 5, and NBC 4 . A passionate advocate of plant-based foods for optimal health, Tracye promotes initiatives to reverse childhood obesity by increasing consumption of fruits, vegetables, whole grains, and legumes as a nutritionist with the University of the District of Columbia Center for Nutrition, Diet and Health. Tracye directed the first federally funded vegan nutrition program, and was a policy advisor for the Physicians Committee for Responsible Medicine, where she worked on legislation to improve federal nutrition guidelines. Tracye is a graduate of Sidwell Friends School, Amherst College, and New York University, where she received her master’s of public health nutrition. Tracye lives in Washington, D.C., where she was born and raised.

What kind of food were you used to as a child? What would you have for breakfast for instance? We had typical meat, starch and vegetable meals, and soul food Sunday dinners at my Grandmother’s.

For breakfast, I typically had Cream of Wheat or Total cereal with skim milk. We didn’t have a cookie jar, or a candy bowl or sugary cereals, and desserts and fast food were reserved for the weekends. My mother had some health consciousness about food when we were growing up and we hated it! We gorged on junk food at school or at our cousins’ houses. I hated vegetables and was always the last one at the dinner table because I didn’t want to eat them. In fact, I used to dip the bacon back in the grease can on the stove when my mother wasn’t looking. As a child, I never would have thought I’d grow up to become a promoter of healthy eating!

While studying at NYU, you were inspired to become a vegetarian during a lecture given by human rights activist and humorist Dick Gregory. What was the lecture about and what was it that mad you want to become a vegetarian?
During my sophomore year at Amherst College, our Black Student Union brought Dick Gregory to campus to talk about the economic, political, and social state of African Americans. But instead, he flipped the script and talked about the plate of African Americans.

What really got my attention was when he graphically traced the path of a hamburger from a cow on a factory farm, to a slaughterhouse, to a fast food place, to a clogged artery, to a heart attack. That led me to do my own research about diet and disease and to become a vegetarian first, then a vegan. It’s now been more than 20 years that I’ve been a vegan. 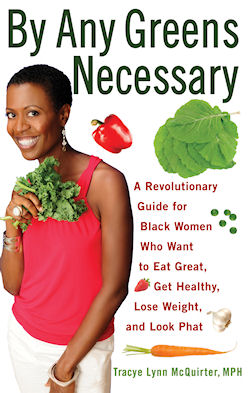 What made you take this extra step?
Actually a vegan is the type of vegetarian that not only does not eat the meat of animals, but doesn’t consume their eggs or fluids, either…so no dairy products.

What made you want to become a nutritionist?
As my passion grew for sharing information about the benefits of eating healthy plant-based foods for our personal health and the planet, I decided to make it my profession. I decided to get a Master’s degree in public health nutrition from New York University.

Can you tell us more about the First Federally-Funded Vegan Nutrition Program that you directed?
I directed the Vegetarian Society of DC Eat Smart program, the nation’s first federally-funded and community-based vegan nutrition program, launched with funding from the U.S. Department of Health and Human Services. In this innovative, hands-on course targeting low-income DC residents, I taught participants about the health benefits of plant-based foods, and how to shop for and prepare healthy vegan meals.

The popularity of the program resulted in a waiting list of more than 250 people—a remarkable achievement for a community-based course about eating vegan. So this goes to show that people are interested in eating healthier and want to learn how to do it.

It didn’t go unnoticed that you are a beautiful natural. When and why did you go natural or have you always been natural?
Thank you for the compliment. I was a sophomore in college when I decided to let my natural hair stay natural. It was the same year I decided to become a vegetarian. I had a paradigm shift in my sophomore year.

I was taking African American Studies and Political Science classes and I was become more aware of myself, my history, and my central place in the universe. I was also becoming more aware of imperialism, sexism, racism, homophobia, classism, and other forms of oppression and mental enslavement. So in freeing my mind, my hair and my mouth followed.

Now mind you, before this, I used to relax my hair every four weeks, so I never allowed myself to see what my natural hair looked like. It was kind of like dipping the bacon in the grease jar. I was way over the top on the other side!

Are you against using chemicals to straightening hair? Can you please elaborate?
It can be quite harmful, so I’m not for it.

One of the most important things to grow healthy hair is protein. How does a natural who wants to become a vegetarian or a vegan gets enough protein?
It is quite easy to get enough plant-based protein eating healthy vegan foods. In fact, it’s almost impossible not to get enough on a healthy vegan diet. Plant-based foods meet all of your nutritional requirements and do a better job of it than animal-based foods.

Vegan foods contain in abundance each of the six essential nutrients your body needs everyday to function at its best: protein, healthy carbohydrates, vitamins, minerals, oils, and water. And plant-based foods have no harmful cholesterol and very little, if any, saturated fat.

You helped to win a lawsuit over biased U.S. Dietary Guidelines. These guidelines have an impact on school lunches and WIC programs. Are there now any vegetarians or vegans represented in the committee and do you think anything changed for the better?
Studies show that following the U.S. Dietary Guidelines dramatically increases the risk of chronic diseases such as heart attack, certain cancers, stroke and diabetes—the top 4 causes of death in the United States. Real change to federal nutrition policy will come when a groundswell of citizens demands it—and that movement is growing by leaps and bounds.

Do you like what the First Lady Michelle Obama is doing?
Yes, she is shining a much-needed spotlight on childhood obesity that is absolutely critical. If we don’t make dramatic changes in what we eat and how we exercise, this could be the first generation of children that will not outlive its parents. I hope to work with Michelle Obama to promote plant-based foods to prevent and reverse childhood obesity. I do that vital work now with the University of the District of Columbia Center for Nutrition, Diet, and Health.

I love the title of your new book By any greens necessary. It has been praised by everybody from Ebony to Spike Lee. Can you tell us more about it? What is it about and what is the goal behind this new book?
[Quick correction: Tonya Lewis Lee, producer and author, has a blurb on the back of the book. She also happens to be Spike Lee’s wife.]

The name of the book came to me as I was searching for a name that represented urgency, activism, and veganism, and was catchy and clever at the same time. I think it works!

What is your favorite recipe in the book?
All Hail the Kale Salad…it’s actually one of the most popular recipes in the book, so we all have great taste!

Where can people get this book and even better, their copy signed?
The book is available everywhere, including Borders, Barnes and Nobles, and Amazon.com. Folks can check out the Appearances page on my web site byanygreensnecessary.com to find out where I’ll be having book signings in their area.

Who inspires you and why?
My mother inspires me the most. She became vegan when I did more than 20 years ago and she was already in her 50s. Today she’s 73 and is in great health—she has no health problems and exercises vigorously six days a week. And she still has her hourglass figure. As I say in the book, my mom is healthy and phat!

Do you have a food guru or are you one yourself?
During the past 20-plus years, I’ve had the privilege to learn from master vegan chefs over the years, including Aris La Tham and Karen Calabrese. I’ve also had the pleasure of eating fabulous and diverse vegan cuisine in a number of other countries around the world, so I guess I could be considered a food guru, in that sense, as well. I’m also a pretty good cook, too!

And your last word?
Many people feel that vegan foods just won’t taste good. As if millions of African American vegans just decided to throw away their taste buds! In this day and age, it should really go without saying that plant-based foods can be delicious.

Just think about foods like spicy black bean burgers with roasted butternut squash, ginger stir-fry vegetables with cashews over wild rice, curried chickpea and mushroom stew with cornbread, strawberry smoothies, blueberry waffles, and apple crumb pie. There are thousands of scrumptious vegan foods out there. Almost everything that you eat now has a healthier vegan version. This is a way of eating that reflects abundance, not deprivation. Trust me, if you can make a dead bird taste good, you can make wholesome vegan foods taste even better.