Home » So, I went to see Sing Song, a musical representing Suriname

So, I went to see Sing Song, a musical representing Suriname 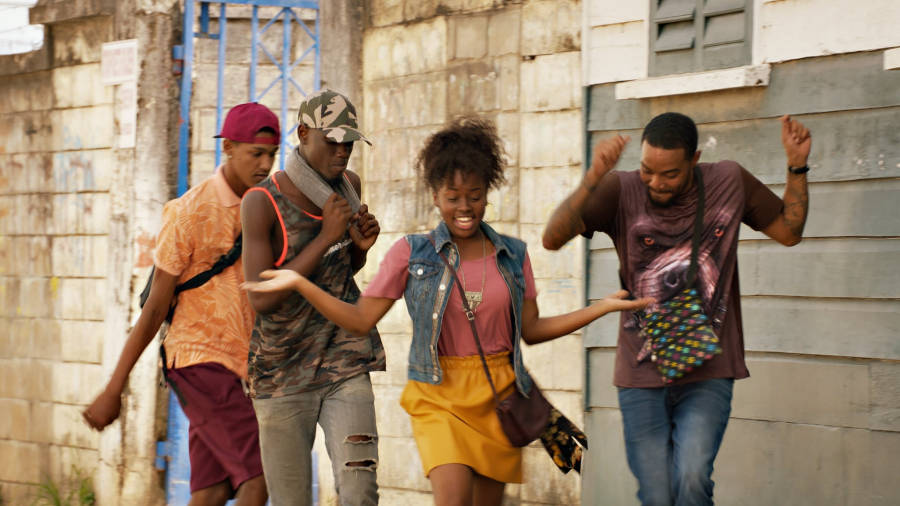 Although my friend Guus Pengel was a screen writer, I honestly didn’t know what to expect. All I knew is that this teenage movie had a super cute Black natural haired girl in the lead who would travel all the way from Holland to Suriname, about 5,000 miles, to look for her mom.

The trailer was a joy to watch but doesn’t really prepare a viewer for the many twists and turns that take you on an exciting, emotional, joyful journey and kept an audience full of kids quietly watching.

The musical starts with Jasmine, played by Georgiefa Boomdijk and her music partner taping a song in the hope to be admitted to the Sing Song contest in Suriname, a country in South America, in the middle of the Guyanas. Soon after we learn that Jasmine is a talented curious school kid living with her dad who owns a flower shop in a small town in the Netherlands.

The first thing that stroke me as very odd was the food the teenager served her dad. It was Hutspot, a typical Dutch dish, not at all Surinamese. This turned out to be a clue that her dad wants to shy as far as away as possible from their South American Black roots. However, blood is thicker than water and Jasmine smart and determind enough to come up with a plan to find her roots.

When she and Stein who guides her on the guitar are selected for the competition in Suriname, they lie to her dad that they are going on a cultural trip to Berlin, Germany for school. It is here where the movie really starts.

The warm welcome, the kids being kids but also the response to this girl all the way from the Netherlands who is called a bounty; Black from the outside, White from the inside; a way to say, you may look Black but you are not one of us. Still the kids’ passion, talent, warmth and sweetness reminded me of the time I grew up.

So did other characters, like the cook played by Liesbeth Peroti who I happen to know also has a golden voice herself, is the typical woman who will always feed you the best of the Surinamese kitchen. We do have these women in all kinds of flavors in Suriname. With so many ethnic groups these sweet cooking moms can be from Javanese, Indian or Maroon descent and the food will be equally delicious.

The prostitute who robbed Jasmine from her 50 SRD, is I think typical in every country. Very well played and actually quite a hilarious when she starts running away with the money which almost makes you forget about the innocence of a young kid who didn’t see that coming.

The woman who takes the cake for me though is the blind woman in the village who plays Jasmine’s grandmother. Her expressions captured me even without her having sight. It was her body language, her smile, her cornrows, the way she embraced Jasmine even the way she danced in the end that exuberated a kindness that stayed with me long after the film ended.

When I heard about this musical, I really didn’t think it would be so emotional that I would cry. Then I thought that my wheeping had to do with me watching Suriname and my roots on a big screen but clearly it was much more.

A teenage girl in search of her mom by herself in a country unknown to her, will touch everyone. The determination of Jasmine to find her birth mother brought at least two random adult New Yorkers to tears as they told me. That sure made me smile. The film is just a wonderful movie with twists and turns that will have even grownups on the tip of their seat tearing up. In Simon’s words, it’s a YES for me!

Do you want to know more about Suriname? Follow America\’s Next Natural Model goes Suriname! or join us on a trip to Suriname.

All Posts »
PrevPreviousAre you America’s Next Natural Model 2018?
NextSilk Press: The AftermathNext