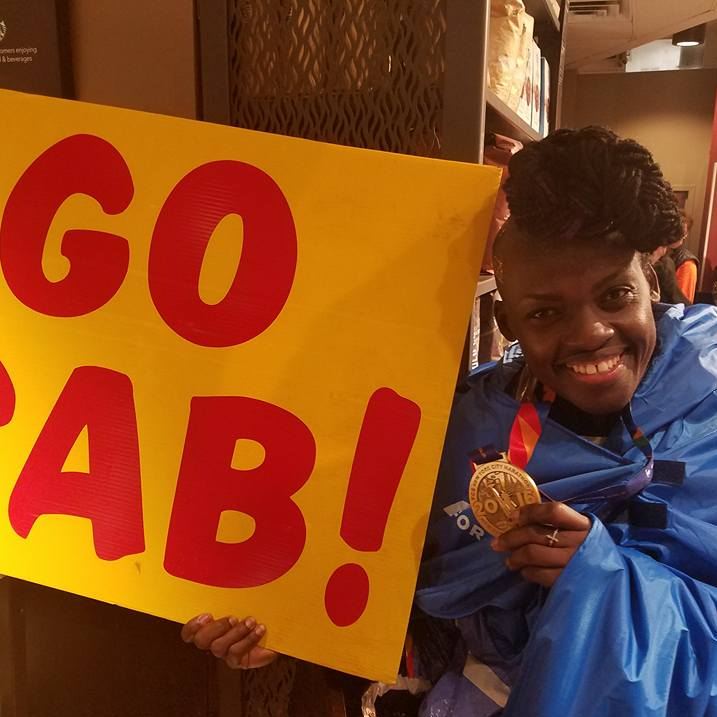 If she’s not styling natural hair or managing Sabine’s Hallway, her beautiful Salon located on Nostrand ave in Brooklyn, NY, you can catch Sabine Bellevue supporting a charity, organizing Loc Appreciation Day, working on her annual Natural Aristocratic Tea event or running, training for another marathon. 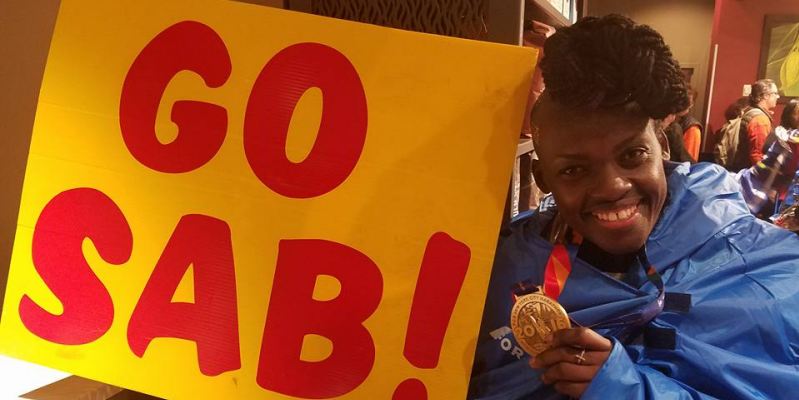 Yesterday, November 6 was miss Bellevue’s 4th New York Marathon which totaled her marathon medals to eight altogether. In the nearly six hour run where she had to take a short break because her injury was playing up after three hours of running, Sabine raised a little over $3,000 for her favorite charity, Children of Promise.

Inspired by the runners she would see while speed walking in the park, Sabine started running in 2009 to speed up her weight loss efforts.  Her first race was the NYRR Midnight Run in Central Park. Her first Marathon was 2010 NYRR ING NYC MARATHON.

In order to get in a racer mind frame she would do a race once a month to keep her body in a more healthier condition. Then five months before the race she started training for the marathon. That made her more disciplined and consistent. The Natural Hairstylist also went to Jack Rabbit to get fitted for the proper sneaker, drank more water and educated herself on running techniques, gear, best foods to have before and after running.

After seeing a city bus advertising “Run NYC ING Marathon in 2010, the owner of Sabine’s Hallway Natural Hair Salon was sold and ready for the next step. Of course she had to learn that you can’t just signup for this huge marathon but knowing Sabine, you know that didn’t keep her from doing what she had to do. So Miss Sabine completed the multiple steps to follow before and entered the NYC  marathon in 2012.

Despite an injury that has plagued her heel for a couple of months, the loced Brooklynite plans to do at least 2 to 3 marathons a year. A Boston Marathon and even a triathlon are in the planning.

The race in her own words

Before the gun goes off I’m usually a bit nervous. I wonder if  that I drank enough or too much water.  During the race hundreds of thoughts goes through my mind like how long will it be before I have to use the porter potty or how long has that person been running.  Sometimes I’ll pick out someone that is a head of me by several kilometers and try to catch up to them and once I do I find someone else.

After about 19 miles usually my mind & body are no longer on the same goals.  Lol. I really start motivating myself by saying positive things “You got this Sabine.” or “Push through it, you’re almost done. ”  It tends to help and if my body starts to shut down, I slow down a bit or speed walk for a few minutes.

During the NYC marathon the spectator makes the racers feel so special with the positive cheering,  high fives & providing snacks. It’s an amazing experience. Usually by mile 23 I’m looking for a way out.  Lol. Seeing my friends and family pushes me to continue. Sometimes my leg starts cramping. It’s amazing what you can talk yourself into doing.  I’ve completed every marathon that I laced up for.

The absolute best feeling is when cross the finish line!  The feeling of completion and how limitless we are! And limitless she is!