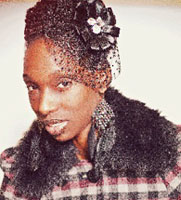 Chassity-This is the first challenge you looked like an already established working PROFESSIONAL  model.  The makeup was done beautifully. The photographs are gorgeous. Your eyes are stunning. The hair is perfect. Not as dramatic as the Iman photo but then again the photo was only a guide for you to create your OWN version which you did.. the look is modern, fresh, clean and age appropriate.

Chassity-This is the first challenge you looked like an already established working PROFESSIONAL  model.  The makeup was done beautifully. The photographs are gorgeous. Your eyes are stunning. The hair is perfect. Not as dramatic as the Iman photo but then again the photo was only a guide for you to create your OWN version which you did.. the look is modern, fresh, clean and age appropriate.

Kala– I thought you used the eyeliner well,  your hair is beautiful but I thought the eyes and lips could have popped more. Your facial expressions had a look of “uncertainty” as if you were not confident and had doubt in what you were doing. The second to last photo w/ the windblown hair, you could have really sold it if the makeup and the facial expressions were on point but unfortunately in this challenge  you did not look like a model. You did not sell the product.

Jalita- Beautiful job on the eye makeup! nice touch to bring in the printed scarf and big gold earrings based on the original IMAN photo..shows you pay attention to details and I like that! I feel the lips could have been done better, cleaned up around the edges. I don’t like that your poses look forced and unnatural. The first photo is nice but the remaining photos not “modelicious”. At this point you should look and feel more comfortable in front of the camera.

Carlie- I don’t like the way the hair was styled.  I didn’t think you used enough of the products and if so It did not show well on camera. I appreciate you taking risks on doing something different in regards to the cheetah eye shadow look but It’s important to remember the client and how they intended the products to be used. I like the cheetah accessories and if the makeup was on point the accessories would have been a nice touch. Unfortunately, your face looks almost identical in every photo, at this point you should remember to work the face and sell the product.

Nefertiti-The lip color and eyeliner looks nice but that’s about it. It appears you hardly have any makeup on. I can understand if you are not use to wearing makeup and you were afraid to over apply it but when you are being photographed it’s best to apply it slightly heavy so it will read well on the photo because your skin pigment will absorb the color. Also, most of your poses as well look forced and unnatural. The last photo is nice only because it doesn’t look as forced as the others.

ReShonda– Love your cheetah tank, the earrings and dark eyes. The lip color could have been filled in more around the edges. Love your smile in the second photo. The first 2 photos you look like a model. I would have blended those outer edges of the eye makeup more to avoid having that line that stops dead equally with the outer eyebrows but overall you wore the makeup very well! Very good lighting in your photos! Shows the makeup well. You look beautiful just try to relax the face a little bit more like in the second photo. Nice job.

Natasha– The sequined hat was a nice touch and the makeup on the upper eyelids were nice although it could have been blended more in regards to the inner corner areas but that’s where it stops for me. I did not like the way the gold color mixed in with the black liner on the lower eyelids. I did not like your choice of earrings. The photo where both hands were on your head could have been left out totally because the position of your arms/hands look awkward and distracts from the photo. Although I do see a hint of emotion in your eyes in the 2nd and 5th photo your facial expressions/body position reads an “uncertainty” about them in the other photos. I’m not inspired to want this makeup look.

Desyray– Love how your makeup looks in the 2nd photo but I don’t like the actually photo, it over edited and looks unnatural.  I do not like the hat. Overall I loooove the fact that I can actually SEE your makeup and I thought you used it very well. The lip color looks perfect.  Your photos have that same drama that can be seen in many of Iman’s photos. I thought you did a good job. You were selling the look!  Your photos closely resemble the Iman photo and that’s great but the photo was only a guide for you to create your OWN version.

**In no particular order, my top 3 picks for this challenge was  Chassity,  ReShonda, and Desyray  For me the winner is Chassity.

Carlie and Nefertiti were the weakest this challenge. My pick for elimination is Nefertiti. What saved Carlie was the fact that she ATTEMPTED to be creative with her own version of the cheetah chic look and THAT was the challenge.