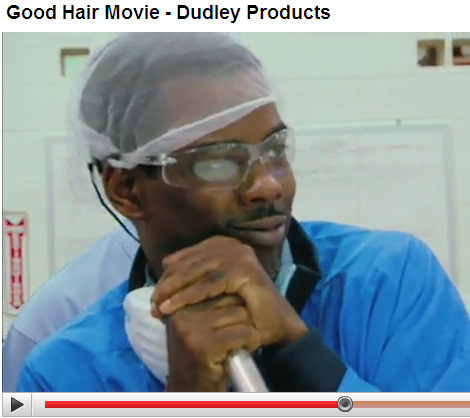 After so much hype, discussion and speculation about Good Hair, I was eager to go watch the movie and see it for myself. The youtube clips were fun to watch, the online discussions were pretty predictable and while the Oprah show showed all different opinions, the most controversial ones stayed in the back of my mind. Especially her comment that Chris Rock had “ousted” us Black women.

Despite all the coverage and conversation, I didn’t know what to expect of this comedy-documentary. As Chris mentioned he is first and foremost a comedian. So in his view his job is to make people laugh, not necessarily to change minds let alone forcing an opinion upon his audience.

His motivation to make this movie seemed clear. One of his daughters was gushing a little bit too much about her fiend’s long straight hair. So much so that it made him feel a bit uncomfortable. Then when she came home crying one day asking why she had bad hair, he thought he needed to do more than affirm her beauty. The comedian decided to do a documentary about what it is that Black women have with their hair.

While you shouldn’t expect to get an in-depth view or answer from this comedy-documentary, it shows enough funny truths to get people talking. No there was nothing new for me personally to learn about black hair care and our practices but there are certainly humorous moments to see and what really surprised me was the impact of the film.

Although I am not a nappy Nazi who is trying to turn every one who is relaxing into a natural head, I have ran into trouble communicating that relaxers are the most dangerous beauty products for hair available on the shelves. During one of my lectures in Amsterdam, the Netherlands, they tried to shoot the messenger when I told them that every one had the right to straighten their hair but I also thought it was important for them to know that relaxers were no joke. They probably thought I was bias because I do promote natural hair but it was clear that some in the audience considered any relaxer making company more trustworthy than my words. I guess some people probably think it’s better to get meat from a vegetarian.

Needles to say that I was happy to see that Chris didn’t hesitate to take this issue on and proof the dangers of the chemical straighteners in his movie. In his own typical comical way he enters the largest relaxer factory and asks the questions we should all ask in a funny tone. His expressions are amusing yet telling when a chemist demonstrates how sodium hydroxide, a main ingredient in relaxers, burns a hole into raw meat and how easy a soda can dissolves in this stuff.

Since this was nothing new for me, I wasn’t surprised by the scene but I was definitely amazed by the shocking effect it had on the audience. Even my husband who knew about the dangers of relaxers was shocked. The visual on the big screen truly brought home the message and he was not the only one. Two young ladies with relaxed hair were in such disarray that they contemplating going natural immediately.

So rather than saying the movie ousts us I would say it mirrors a majority of Black women and their hair in a funny way while feeding us information we should have been aware of all along. By showing the dangers of relaxers and telling the story behind the weaves women can become more conscious consumers.

Still, the best thing about Good Hair is the debate it sparked. Not only did this film finally give Black and White women an opportunity to touch upon a most delicate and literarily untouchable issue for centuries, the comedy also triggered deep seeded emotions and opened up the conversation about Black hair. Some say it touched a nerve but no matter how you preserve the movie Black hair has been a taboo for far too long. Chris was spot on when he said on the Oprah show secrets will kill you because keeping quite about Black hair has been killing our strands for many many years.

The result is that 73% of Black women suffer from relaxer induced alopecia and no one is talking about it. Black women outspend every other race on hair care, yet we suffer disproportionally from hair and scalp issues but no one seems to care.

So even though the debate that is going on now is not yet about the health of Black women’s hair and the fact that Black people are the only people on the entire planet who still need to go to court to wear their God given tresses naturally is not mentioned, I am happy with the start. I sincerely hope that Good Hair is the beginning of a conversation in and with the Black community on how to get better and healthier hair.