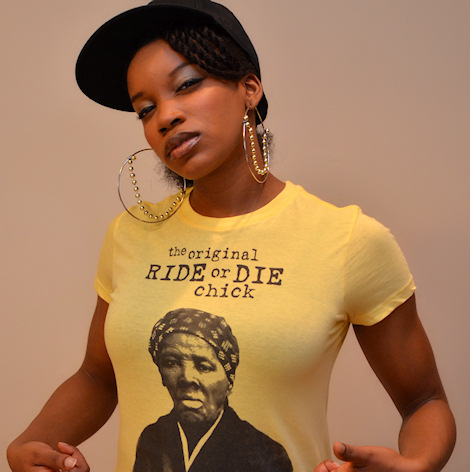 The importance of clothing that accurately portrays a Black woman

The theme for my shoot is “New Orleans beads for SoulSeed Tees.” I incorporated Mardi Gras beads into each of the shots. I chose this theme because I see a lot of similarities between the representation of my city in the media and that of Black women. When people think of New Orleans, Mardi Gras is one of the first things that comes to mind. It’s seen as a tourist stop, a place that only matters during that time of the year. New Orleans is also feared for its crime. In a nutshell, what I hear from the average tourist is “New Orleans is a great place for a party and a good time, but if you want a nice place to live, choose elsewhere.”

It’s funny how this opinion can be transferred to the portrayal of a black woman. Media shows us as loud, vibrant, and mouthy. In rhymes put to a beat (or what some call music) our bodies are just to be used for a “good time” and disposed after use. We’re not seen as long term material. Sadly, many beautiful Black queens have ingested these misconceptions and misbeliefs and manifest them in their daily lives. It’s like they’ve never heard the powerful, liberating words of Nina Simone. These lost queens have forgotten or are unaware of what women like Harriet Tubman, Shirley Chisholm, and Mary McLeod Bethune have fought for. They don’t see what women like Michelle Obama and Anna Tibaijuka are fighting for today. Our lost queens are blind to the vision of hope for the future and what our daughters will fight for and achieve tomorrow.